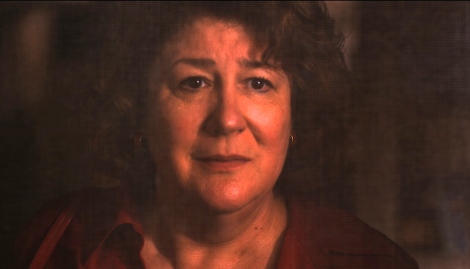 On the 113th birthday of the Master of Suspense, I think it’s a more appropriate time than any to discuss indie filmmaker Zack Parker’s new psychodrama, “Scalene.” The taut, Bernard Herrmannesque music that opens the film hardly seems like a coincidence, since Parker sports a Hitchcockian delight in shifting audience sympathies. Who can forget the moment in Hitchcock’s 1960 game-changer “Psycho” where Norman Bates disposes of the bloody mess left by his mother? Up to this point, the audience had been identifying entirely with the plight of this victim, but as soon as she’s out of the picture, audience members suddenly found themselves identifying with Norman. When the dead woman’s car momentarily halts in its slow descent toward the swamp floor, the viewer’s first impulse is to scream, “No!”

Parker attempts to create that same sort of morbid magic in “Scalene,” a film that explores a single troubling event from three different perspectives. On its excellent Blu-ray disc (released July 31st), the director discusses how the divisive reactions to his first two pictures inspired him to make a film about the diverse ways in which life is experienced and interpreted. The experimental narrative unfolds in three separate acts: the first has a reverse chronology, the second is nonlinear and the third is linear. This is all far less confusing than one might think, thanks to the elegantly structured script co-authored by Parker and Brandon Owens. The three colors that flood the screen during the opening credit sequence play a big role in all that follows, as Parker subtly alters the costumes and art direction to represent the psyche of each character. The more you’re aware of these visual nuances, the more you’re bound to admire Parker’s audacious craftsmanship.

Since each character is naturally the hero of their own story, they come off better in their own mind than they do in the minds of others. In the film’s first section, veteran character actress Margo Martindale tears through the screen as Janice, a vengeful mother devastated by the wrongful incarceration of her grown son, Jakob (Adam Scarimbolo), whose severe mental problems have rendered him mute. It’s downright painful to watch Janice attempt to woo a man (Jim Dougherty) who clearly doesn’t have the patience to deal with her son’s illness. In the film’s impressionistic midsection, the camera enters the mind of Jakob as it drifts helplessly through a hodgepodge of distorted memories.

Many of the plot twists stretch the boundaries of credulity, and there are a couple key acts of violence that seem wildly over-the-top. Yet the film is consistently grounded by the fine work of its three leads. Hanna Hall–an actress perhaps best known for uttering the iconic line, “Run, Forrest, run!” in “Forrest Gump”–is utterly riveting as Paige, the good-hearted yet controlling college student who agrees to take care of Jakob when Janice is out of the house. The final act is viewed from Paige’s perspective, and it’s here where Hall emerges as the film’s fractured heart. She has the profoundly tricky task of getting the audience to identify with her decidedly unsympathetic plight, and her performance succeeded in breaking my heart even as my mind reeled in alarm. Parker ends the picture with a slow pull-in to a seemingly lifeless eye that pays homage to the infamous shower scene in “Psycho,” while calling into question everything that came before it. “Scalene” is a provocative meditation on the subjectivity of truth that is well worth seeking out. And if you’re an aspiring filmmaker dying to know what it’s like to work on a film set, check out Jakob Bilinski’s epic three-and-a-half-hour documentary on the making of “Scalene” (available as a Blu-ray exclusive).

Check out my interview with Hanna Hall here.