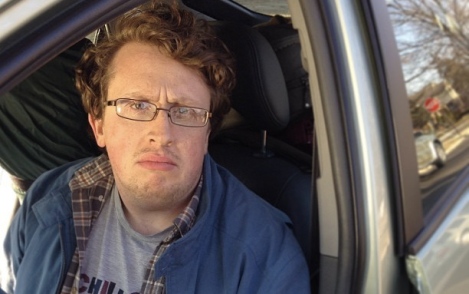 A legion of improv artists numbering over 50 have sunk their comedic choppers into “Party Time Party Time,” a Chicago-based “melanchomedy” from directors Marty Schousboe and Morgan Lord. Though production is wrapping soon, the film still has until Wednesday, May 15th, to raise its funds in full on Kickstarter. Any cinephile or member of the film community seeking to support Windy City moviemaking should give this project a look.

The plot centers on a jaded guy seeking an outlet for his misery (he’s just been dumped by his wife), and finds it in an apartment stuffed with thirtysomething partiers. In the words of the rapping dog in Camillo Teti’s deplorable “Titanic” musical, “It’s Party Time!!!” Indie Outlook spoke with Schousboe, Lord and producer Shane Simmons about their picture, which promises a great deal of cathartic, wince-inducing laughs.

Q: How did the project come about?

Marty Schousboe (MS): Morgan and I met a couple years ago doing improv at iO and we wrote a stage show together last year. I’ve worked in movies for a while and wanted to make one myself. The original impetus was to get as many people involved as possible, and we thought about what our take would be on a party movie. We had the bare-bones idea for the movie in August and it really didn’t come together until October. I’ve worked with Shane for a long time, and I brought him on as producer because he is very organized.

Morgan Lord (ML): And he stays up all night. He’s nocturnal, so that’s helpful.

Q: Though the cast is comprised of improvisers, it sounds like the film was largely scripted.

MS: That’s true. It was a complete script with the exception of four scenes in which we had zero dialogue written. Everything else was scripted and then we allowed people to explore beyond that.

ML: Sometimes we’d say, “You have to hit these few beats, but go to town. You know who your characters are.” This is my first time directing a film. It’s so great to have a team that’s way more experienced than I am to guide me and to have a community that’s so supportive and that we all feel comfortable with.

Shane Simmons (SS): There are still so many more actors that we wanted to include, but we already have over 50 of them in the film. It’s been a tricky film to schedule because it’s an improvisational form where you let the scenes breathe and we find them onset. So that’s been a nice challenge to have that sort of free form goal. It’s been maddening at times, but when it pays off, which it usually does, it’s just the best thing ever.

Q: How much looseness did you give each scene?

MS: It depends. The movie has a dramatic spine, so there was a tone that we wanted to treat very carefully. Even the dramatic stuff is done with comedic purposes, but it’s not making fun of itself. Other scenes are just there to give us some information on a character, or it’s basically a bit. Bits that are funny in the writing room change so much over time, and through different takes, we let people find their own material. That’s the beauty of having these improvisers onset. We give them a really great dumb idea, and they can make it even greater and dumber. 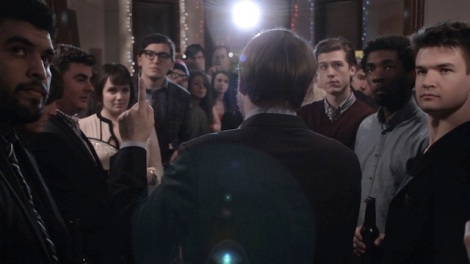 Q: Did films such as “Wet Hot American Summer” serve as an influence?

MS: I don’t think we were trying to mirror anything specifically. We love the feeling of that movie and the plot is there just to facilitate the bits. The love story is trivial, and we are kind of doing the anti-love story. It’s about a person who just had his heart broken and is not looking for love at all when he goes to the party. So instead of being sex-crazed, he’s just looking for an outlet for misery.

ML: And he can find it pretty easily.

MS: There are probably 30 characters that have some sort of story that is weaved into the movie. It’s very fluid and also very disjointed. Some things are perfectly told in a three-act structure, and other things are uncomfortably askew.

SS: These actors are all improvisers, and you don’t get paid to do improv. You have a day job, and then to do improv at night. So as far as scheduling goes, we were wondering how we were going to make this happen. We were very up front about the time commitment, and everyone was super-excited to commit to it, which kind of blew us away. Everyone was just so stoked to be making it in Chicago.

MS: The most amazing thing about improvisers, and I guess this would pertain to any actor, is the sense of community. Everybody is your peer, so you’re getting advice and notes from your peers. Improvisers are wonderful about trying different things and listening to any kind of advice.

ML: One thing we’d occasionally have to push is the tone that we were going for in a particular scene. We’d give them a wacky idea and they’d run with it. For example, Marty likes words to be mispronounced.

Q: Who are the key members of your crew?

MS: The three of us are producing along with Liam Winters. We’re also in charge of the art department, ADing, script supervising, hair and makeup, nearly every single department. Eon Mora was the entire camera department, and then we had one guy [Dowell Gandy] sound mixing and doing everything himself. That was our skeleton crew of six people. Everybody except Eon and Dowell were acting as well.

Q: What are some of your Chicago locations?

MS: Since 80 percent of the movie takes place inside an apartment, we wanted the exteriors to look as iconic and vibrant as possible. We shot down at an art gallery in Pilsen for a great rooftop view of the city, even though the party itself was in Lakeview, but we never really say that out loud.

SS: We also shot on downtown Loop streets and on the lake.

ML: We found a weird empty parking lot where the train lines are running through just north of Chinatown, and you can see the city from there.

Q: How will Kickstarter help this film?

MS: The Kickstarter campaign is basically there to get us out into the world. We shot the movie for very little money, and production itself is such a small percentage of the money that we’re trying to raise. We need to get a sound designer and a color corrector. There are some special effects shots that we need some help with. Marketing the movie and submitting it to film festivals is really expensive. Kickstarter itself is a major percentage of the cost because it takes five percent and then there’s a processing fee that takes another five percent.

Visit the official Kickstarter page for “Party Time Party Time” to view the pitch video featuring Marty, Morgan and Shane. You can also follow the film on Facebook.