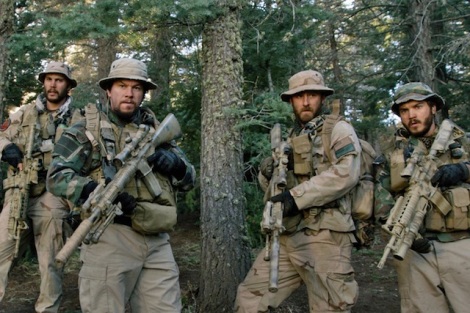 On February 25th, 2004, I was seated in a theater watching “Passion of the Christ” with members of my church congregation. I had never witnessed so much crying outside of a funeral, as quivering audience members wiped their glistening faces, mixing tears with powdery residue (from Ash Wednesday services) still caking their foreheads. Only one man remained unmoved: my beloved pastor, Father Sherry, who sat next to me with an expression that can best be described as perplexed chagrin. During one of the film’s many gratuitously violent tangents, in which a bird feasts on the eyes of Christ’s crucified heckler, Sherry leaned toward me and whispered, “They ripped that off Hitchcock!”

I imagine Peter Berg’s “Lone Survivor” will provoke the same divisive reactions from mainstream audiences that Mel Gibson’s blood-soaked passion project garnered a decade ago. Berg’s film is as uninterested in the War in Afghanistan as Gibson’s film was in the life of Jesus. No effort is made to contextualize the war itself, explore the controversial reasons why U.S. troops are stationed in Afghanistan in the first place or provide the soldiers with any semblance of a three-dimensional personality. As for the Afghans themselves, they are either sinister moustache-twirlers or saintly caregivers (much like the non-Caucasians in “The Blind Side”). Claims that the film endorses jingoism are somewhat justified by Berg’s dialogue, comprised largely of macho catchphrases such as, “You die for your country. I’m gonna live for mine.”

So what is “Lone Survivor,” in essence, about? Is it little more than a glorified army recruitment ad on the order of Mike McCoy and Scott Waugh’s offensively inept propaganda, “Act of Valor”? During the first ten minutes or so of Berg’s picture, that certainly seems to be the case. Based on a 2007 memoir co-written by former US Navy SEAL Marcus Luttrell, the film recounts a real-life assignment taken by the author and three of his teammates to hunt down Taliban leader Ahmad Shah. Their mission abruptly failed when they were spotted by local Afghans, thus leading to a debate (contrived for the movie, according to Luttrell) on whether to kill the unfortunate bystanders or release them, a decision that would place the soldiers’ own lives in imminent danger. The soldiers chose the latter, resulting in a firefight that killed a total of nineteen soldiers, while leaving Luttrell critically wounded.

Unlike Michael Bay’s hollow patriotic posturing, Berg’s direction isn’t blind to human nuance, coaxing uniformly superb work from Mark Wahlberg (as Luttrell), Taylor Kitsch, Emile Hirsch and especially Ben Foster (in his third great performance of 2013, following “Ain’t Them Bodies Saints” and “Kill Your Darlings”). Like Gibson’s “Passion,” Berg’s “Survivor” is laser-focused on the physical toll of the soldiers’ sacrifice, and it’s here where the film transcends its multitudinous flaws to pack an undeniably visceral punch. Once the men find themselves in over their heads, the subpar script is drowned out by the sheer bone-crunching spectacle of Berg’s expertly staged action sequences, enhanced with peerless sound and makeup design. An already notorious sequence in which the soldiers are forced to hurl themselves down the side of a treacherous mountain is, in some ways, as brutally grueling as the extended scourging scene in “Passion.”

Only tone-deaf masochists would interpret this picture as a simple-minded recruitment video. Considering how injured vets are forced to ask for donations like abandoned puppies, rather than receive the monetary assistance they deserve from the government they risked their lives to protect, “Lone Survivor” can be interpreted as an apolitical ode to servicemen and women criminally underserved by their own country. Berg’s work here is so good that by the film’s third act, I was surprised to find myself overcome with emotion, as Luttrell suddenly finds salvation through a seemingly inexplicable act of kindness. I was even moved by the concluding photo montage of the real soldiers, scored to Peter Gabriel’s exhilarating cover of “Heroes.” Is it a shameless attempt to elicit tears? Perhaps, but Berg’s passion for the men his film strains to honor feels utterly authentic.

As a wartime drama, “Lone Survivor” is frustratingly shallow. But as an approximation of what goes through the minds of soldiers at a time of agonizingly chaotic tribulation, this picture is flat-out riveting. Its perspective is exceedingly limited, but I believe that to be a conscious choice. The soldiers are trained to view the world as black and white, and for two hours, the camera invites us to share in their gaze. Yet the feeling that consumed me while walking out of the theater was not an exultant pride in America, but an aching despair over the suffering endured by people fighting for ideals as archaic and deceptive as the statue in New York Harbor. These people deserve a whole lot better from their country, their government and even from this movie. But it’s a start.