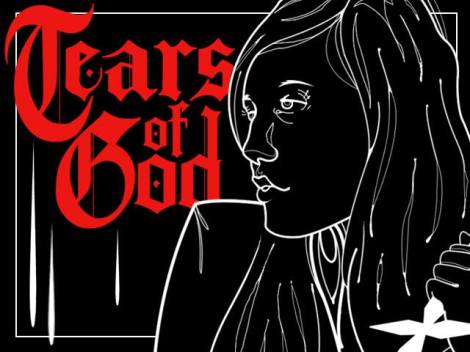 After delivering one of last year’s most electrifying performances in Amy Seimetz’s “Sun Don’t Shine,” the remarkably prolific actress, Kate Lyn Sheil, is set to star in a deeply intriguing new picture, “Tears of God,” currently raising money on Kickstarter. The film marks the feature debut of North Carolina-based filmmaker Robert Hillyer Barnett, who has already proven adept at crafting atmosphere fraught with melancholic tension. According to the official synopsis, the story centers on a young woman “struggling to find meaning in a barren, apocalyptic landscape” while “seduced by the chaotic allure of possession.” If anyone could pull off a role like this, it would be Kate Sheil.

With 11 days to go on the film’s Kickstarter campaign, Barnett spoke with Indie Outlook about his fascinating project, his love of long takes and his interest in the themes of life and death.

Q: How did you first become attracted to filmmaking?

A: When I saw “Jurassic Park” as a kid. Later on, I saw “Eyes Wide Shut” on Skinemax at 2am, and it changed the way I thought about film by 4am.

Q: What is the North Carolina film community like?

A: Underrated. There are the huge Hollywood productions that come here for the tax breaks, but I feel like most of them completely overlook the diverse geography. They try to contort locations to fit inside their pre-packaged ideas. I lived in New York for a year but decided to move back in 2010 to work with my friends who won the Doritos Crash the Superbowl contest that year. They had just bought a ton of equipment, so we, for barely any money, shot a lot of short films and projects all over the state. That is the good part about filming in North Carolina—you don’t need permission or that much money to make a film. And everything is beautiful.

Q: Why do you feel you and your co-writer, Diamando Proimos, are a good artistic match?

A: We just kind of see things similarly in our mid-20’s. When we write, I typically have grand thematic stories and scene ideas, and Dia fleshes them out, adding a more personal and quiet dimension to the physicality of the film, rather than just falling back on larger ideas.

Q: Your 2013 short film, “Holy God Holy Mighty Holy Immortal Have Mercy Upon Us,” makes striking use of silence, telling its story through vivid imagery and sound design. What attracts you to this storytelling technique?

A: The film to me is about a woman sorting through her world after failing to connect to anyone. I wanted to make a quiet film, seeing as the only time you truly allow yourself to experience loss is when you are alone. I didn’t storyboard the film—I just wrote a shot list and kept some ideas in my head, so that we were able to go with the flow and give the locations proper angles once we got there (I hadn’t been to most of the locations until the day we shot).

Q: What was the inspiration for “Tears of God,” and what sort of impact does the work of Dario Argento and Andrzej Żuławski have on your approach?

A: I think as your body starts to degrade and death becomes more tangible, you begin to cling to things to keep you alive—whether that be marriage, a political position, a job, religion, whatever. We are both fascinated and terrified by the way people submit to these ideas or beliefs. Żuławski is the master of destabilizing the audience. It is hard to watch any of his films in one sitting, and they ruin you for days. I like the idea of a film working relentlessly for a tone—like the bizarre, theatrical mania he pulls out of his actors or the movements of Żuławski’s camera or how his films are cut—these are things that I am pulling influence from for my film. Argento, on the other hand, brings to the table incomprehensible films on paper, but they work in such bizarre self-aware imperfection. How his lighting fluctuates with emotion and barely recognizes a stern color palette, that is something I am incorporating into the film, but in a different way.

Q: The intermingling of the living and dead appears to be a theme shared by both of your films.

A: I think as people we are intrinsically confused, and we choose to explore that confusion or ignore it. It is an easy thing to believe that everything will make sense when we die. I thought it would be interesting if there was just as much of a tragic limitation of knowledge in death as in life.

Q: What interests you about the art of long takes?

A: I like the imperfection and rawness of long takes. I like the audience knowing there is a person holding the camera too, in the situation with the actors. It makes it unsettling. In the films I make, which center on a certain lack of control, I think long takes work and look better than coverage. Not to sound too bold, but I feel like coverage is kind of a microcosm of the weak grip we have on things in life, along with our ugly attempts to strengthen it. I’d have to say my favorite film with long takes off the top of my head would be “Charisma” by horror genre-blending genius Kiyoshi Kurosawa. There are tons of long takes where the characters and the camera will move to frame multiple shots instead of cutting.

Q: Your synopsis on the Kickstarter site promises “restrained then chaotic performances,” which is a perfect fit for Kate Sheil, considering her versatile range of abilities. How did she become attached to the project?

A: Diamando and I were introduced to Kate after the “Sun Don’t Shine” premiere last Spring in NYC by our friend Kentucker Audley. We all hung out that night, and when talking about recent films we’ve seen, I mentioned that I was just recovering from Żuławski’s “Possession,” which turned out to be her inspiration for her character in “Sun Don’t Shine.” We were drawing blanks when it came to casting the lead, and so I just randomly e-mailed Kate. It feels surreal that Kate said yes, since she is basically a dream choice for the part. How the screenplay is written (around 40 pages) is going to untether Kate’s performance, giving her freedom without needlessly dragging each scene back to the plot. I can’t overstate how excited I am to work with her.

Q: Tell me a bit about your independent production company, Bending House. I like the tagline, “crafting unique films that observe the audience as much as they are made to be observed.”

A: The name “Bending House” comes from our desire to bend genres and ideas of what films should look like. I don’t want to spoil the specifics in how we are going to employ that tagline, but the goal with this film is to make an art house horror version of “Gravity.”

Q: What are your primary goals with the Kickstarter campaign?

A: Besides raising the very very necessary funds needed to complete the film, we want to build an audience, to rally people who want to watch something different and to deliver it to them.

To donate to the “Tears of God” campaign, visit the film’s Kickstarter page. More information can also be found on the film’s official site and Facebook page.