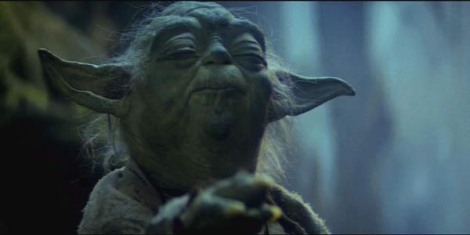 With May the 4th (Be With You) Day nearly upon us, and photos of the newly announced cast for “Star Wars Episode VII” making the rounds online, Indie Outlook is traveling back to a time not so long ago in a galaxy not all that far removed from this one. We’ll be returning to an era where George Lucas’s groundbreaking blockbuster saga was supposedly “complete” in an attempt to see if, indeed, it warrants a new chapter. Whereas his first celebrated “Star Wars” trilogy redefined the studio system by illustrating the limitless possibilities of the art form, his widely criticized prequel trilogy demonstrated the limitations of his effects-laden storytelling. The character of Anakin Skywalker, a hotshot rebel-turned-mechanical tool for the Empire, turned out to be symbolic of Lucas, who ultimately came to embody everything his indie idealism had reacted against.

Now with Lucas out of the picture, the upcoming Disney-produced “Star Wars” trilogy threatens to become a generic clone of contemporary crowd-pleasers such as the neverending Marvel series. Director J.J. Abrams has already removed the distinctive spirit of “Star Trek” from his two diverting if unremarkable reboot installments, while trying to make the cheerfully square subject matter appear hip—and thus, blandly marketable. The only thing I find enticing about his film, set for release next December, is its ensemble of actors, mixing fresh faces (John Boyega, Daisy Ridley) with familiar ones (Hamill, Ford, Fisher). I’m especially excited to see how Adam Driver, one of the most thrillingly unpredictable actors of the moment, fits into this universe. I can’t even imagine Lucas sapping this guy of his naturalistic charisma—though let’s not forget what happened to Samuel L. Jackson. Therefore, with a new trilogy on the inevitable horizon, let’s take a look at the first six pictures, ranked in order of their overall Forcefulness (midichlorian count notwithstanding)…

Aside from the peculiar moment when a nasal-voiced drug dealer (who looks and acts like a fan who stumbled in from a nearby Comic Con) unwisely tries to sell Obi-Wan some death sticks, this truly abysmal excuse for entertainment lacks any trace of the joy, humor and ingenuity that fueled its predecessors. Much of the screen time is devoted to a miserably passionless romance between Anakin Skywalker and Padmé Amidala, played by Hayden Christiansen and Natalie Portman with all the spontaneity of brainwashed cyborgs. Even when Anakin rants about how he killed innocent women and children during a temper tantrum, Padmé just stands there, as if mesmerized by the sheer awfulness of his line delivery. And let’s not forget the dialogue, which surely ranks among the most wince-inducing ever to be featured in a major studio release not helmed by M. Night Shyamalan.

“I don’t like sand. It’s course and rough and irritating and it gets everywhere. Not like here. [Anakin glances at Padmé] Here everything is soft and smooth.”

If Abrams genuinely wants to satisfy his audience, he better not try to please everyone all at once. Such a safe approach is a surefire recipe for eliciting disappointment, as Lucas famously learned with this picture, which was the most anticipated film in the history of cinema and had no chance of living up to the hype. Lucas’s direction and staging were depressingly shoddy, placing actors in front of digital backdrops that conveyed an airless emptiness rather than a vivid atmosphere. Only during key set-pieces—such as the dizzying podrace and the climactic duel with the demonic Darth Maul (played with such fearsome relish by Ray Park that he easily overshadows every subsequent prequel villain)—did the film spring to life. The comedy falls flat and the characters are ho-hum, but the score by John Williams emerges victorious (gotta love how he quotes the Imperial March in Anakin’s Theme).

Though it registered as “too little, too late” for most fans (including yours truly), Lucas’s final directorial effort is his finest since “A New Hope.” Yes, the script is clunky and the flaws that permeated the first two films are still present, if occasionally shoved toward the back (I’m talkin’ about you, Jar Jar). Yet there’s a revitalized energy here that suggests Lucas had merely been coasting through the previous two pictures. Here, he amplifies the drama with some beautiful wordless passages while allowing Williams’s score (an astonishing fusion of his previous five “Star Wars” scores with newly composed material) to take center stage. Alas, Anakin’s transformation into Darth Vader, punctuated by an operatic “NOOO!,” is the sort of bad laugh that takes all the wind out of a film’s sails, ultimately affirming the trilogy’s status as an epic failure. At the end of the day, we couldn’t care less about these people.

“So this is how liberty dies…with thunderous applause.”

Some fans have claimed that “Sith,” for all of its faults, is in fact better than “Jedi,” citing the somewhat lackluster performances and obnoxiously adorable Ewoks as the film’s chief flaws. Yet neither of those demerits dampen the impact of the film’s enormously satisfying showdown between Luke, his father and Emperor Palpatine, played with palpable zest by Ian McDiarmid whose manipulative malevolence was also delightful to savor in the prequels. What makes “Jedi” a better film than “Sith” is the strength of its dramatic arc. We’re truly invested in what happens to these characters, thanks in large part to Episodes IV & V. The gravest misstep Lucas made here, I feel, was his decision to make Leia Luke’s sister, since he had obviously been devising a romantic triangle between them and Han. It makes no sense and feels completely forced. Even the actors don’t seem to believe what they’re saying.

There is no greater enemy to this film than Lucas himself. His perfectionist instincts have led to the disfigurement of his landmark achievement. Why must Lucas feel the need to keep adding superficial “modern” flourishes to a picture that will always be a product of 1977? I wish he’d realize that the visuals in his original cut of “A New Hope” are impressive enough on their terms and should be respected and preserved for future generations. That’s the version I grew up with, and I couldn’t have cared less whether the Death Star blew up like a supernova or if Han traded unnecessary exposition with a slimmer Jabba. What makes this film such a kick is its goofball charm. The weird aliens and ludicrous dialogue (“It made the Kessel Run in less than 12 parsecs!”) are meant to be enjoyed rather than devoutly analyzed. Yet my favorite moment of all is the one that made Harrison Ford a star. No, not his confrontation with Greedo (who cares who shot first?). It’s when he has an awkward exchange with one of Vader’s cronies over the Death Star intercom before shooting it to smithereens…

“Uh, we had a slight weapons malfunction, but uh…everything’s perfectly alright now. We’re fine. We’re all fine here now, thank you. How are you?”

When I was about ten, I had borrowed a friend’s boxed set of the original trilogy on VHS and watched them all during my summer vacation. I liked the first one alright, but it was after seeing this spellbinding masterpiece that I became a lifelong fan. The cliffhanger ending took me entirely by surprise and caused me to delay my eventual screening of “Jedi,” just so I could prolong the glorious anticipation. If director Irvin Kershner and writers Leigh Brackett and Lawrence Kasdan hadn’t taken the reigns of Lucas’s franchise, it unquestionably wouldn’t have had such an enduring future. This is the heart of the entire saga, embodied by the diminutive, fiercely powerful creature known as Yoda, brilliantly performed with subtle nuance, grace and wit by Frank Oz. He’s as lifelike a marvel as Gollum in “Lord of the Rings,” and is far more expressive than the cantankerous animated blob inhabiting the prequels. His deeply spiritual belief in nonviolence, transformative meditation and the strength that lies within render his uncharacteristic lightsaber duels in Episodes 2 & 3 laughable. After all…

“Wars not make one great.”

So, in the end, what do we have? Two great films, two decent ones and two we’d rather forget. I suppose a new trilogy isn’t all that criminal of a concept after all. Let’s hope Abrams has the guts to make something extraordinary. Wouldn’t it be great if he saw this as his opportunity to reinvent the Hollywood blockbuster as Lucas did in 1977, inventing his own technology and infusing his spectacle with exhilarating craftsmanship and exuberant imagination? Maybe he’ll even hire a puppeteer. May the Force be with him.