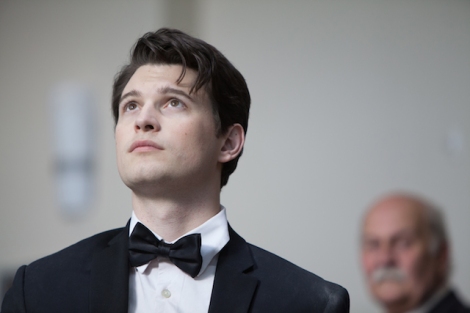 His credits include David Spaltro’s acclaimed indie, “Things I Don’t Understand,” the final season of “True Blood” and the third (and best) installment of the “Step Up” franchise. Now actor Bryan Dechart tackles perhaps the most physically demanding role of his career as a young groom dodging the wrath of God in Casey La Scala’s “The Remaining,” a thriller that provides a ground-level view of the Biblical Rapture. It’s the latest of this year’s numerous films targeting a Christian demographic (many of which I have written about on this site), but Dechart says that his film aims to reach a wider audience by tackling universal issues.

Dechart spoke with Indie Outlook about the epic undertaking of staging the Rapture, making the story resonate on a human level and also highlighted a few of his most enticing short films (one of which I am dying to see).

You’ve studied Commedia dell’arte in Florence, Italy. How did that experience enhance your approach to acting?

The cool thing about Commedia is that it’s such an ancient art form. It comes from the beginning of theatre when Shakespeare had his work performed at the Globe. They were these very intricate plays with lots of heightened language that the audience was not necessarily onboard with. An abbreviated version of the play was performed at the beginning, sort of like a trailer, that told the audience exactly what was about to unfold onstage. When you’re working on film, you’re acting on a much more natural scale. But with Commedia, our first assignment was to do “Romeo and Juliet” in a minute and a half for an audience that was a football field away. It really gets you out of your comfort zone and it inspires you to think more creatively about how you’re telling a story. There is so much of “The Remaining” that is on an epic scale and it requires so much physical acting. You’re not just a talking head, you’re telling a story as you’re running away from the end of the world. So much of the story is told through your body and physicality, even if you’re a tiny figure walking across the bottom of the screen.

Has working within those extremes helped you gauge what’s too big and too small for a given performance?

Definitely. Obviously, the size of the stage or medium impacts the size of your performance. When it comes to something like “The Remaining” where the stakes are so high all the time, it’s a trap sometimes for actors. If you’re focused solely on the emotion of a scene, it becomes melodramatic and campy. But our film is so grounded in its characters and their relationships with one another. The story is told on a very personal level, even though it’s set against an apocalyptic backdrop where fireballs and ice are literally being thrown at earth. Our job was to let the story tell itself. It’s wasn’t our job to make it feel epic and convince the audience that the world is ending. You know you’ve got the scale of your performance at the right level when you’re focusing on your scene partner.

This film connects with two recent trends: the apocalyptic films of the last few years—which have ranged from mainstream comedies to art house dramas—and this year’s string of indies targeting a Christian demographic.

Casey La Scala is our director and he produced “Donnie Darko.” The studio behind “The Remaining” is Affirm Films, which made “Heaven Is For Real.” Casey is the right guy to cross that threshold where audiences are invited to ask questions about spirituality or time travel or whatever the hell “Donnie Darko” is about. [laughs] You’re right that there is a demand right now for films that relate to an audience that wants to see scripture onscreen. They will nitpick it to make sure it contains exactly what is written in the Bible, and they may be terrified to find that this film’s portrayal of the Rapture is word for word out of the Book of Revelation. There’s also an audience that simply wants to watch the world burn and blow up. This film has the potential to start conversations between an audience that loves “The Exorcist” and an audience that is super-excited about “God’s Not Dead” or “Heaven Is For Real.” There will be a lot of interesting debates about the questions that the movie asks such as, “What do you believe?” and “Can you walk the walk when you talk the talk?” The movie kicks off with my character marrying Alexa Vega’s character. We both vow to have and to hold one another till death do we part. What does that promise really mean, especially once the Rapture strikes? Religious or not, audiences will still be faced with the question, “Are you the person you say you are?”

I thought “Heaven Is For Real” did the best job of reaching a wider audience by tapping into universal themes that, in some ways, transcended ideology.

Stories in the Bible or any other text are presented as a reflection of the human condition and ask that people put themselves in the characters’ shoes. When it comes to the Rapture, it’s a specifically Christian encounter and the moment of judgement where some people are taken with the Lord and others are left behind. It’s a story that’s black and white. But when you present a film like this to an audience and give them an opportunity to step into the character’s shoes—sort of like in “End of Watch,” where we see what the characters see, but not like “Blair Witch Project,” where the whole thing is found footage—it makes the questions that the film is asking more personal. Audiences are asking for this sort of film right now.

“Donnie Darko” did a beautiful job of using its effects sparingly. How did the director visualize the effects for you during production?

Our production team that destroyed the world is the team behind “Iron Man 3,” so those guys knew exactly what they were doing. Because the production budget was limited, some of the stunts were practical and others had to be added in later. The threat is portrayed as it is in “Jaws,” where it’s more terrifying to know what’s coming for you than to see it the whole time in CGI. The film has literally every element that could come after you in the End Times. When it came to the hellfire and ice, there were a bunch of crew members pushing blocks of ice—the kind that could be used to sculpt a swan—out of cranes and onto actors on the ground below. Our direction was, “Run down the street to the door of the library, step on the X or you’ll be crushed.” Of course they enhanced it and added some sound effects afterwards, but a lot of it was practical effects, such as the fire, smoke and broken down buildings. But because we stay in a first person perspective, we don’t see the whole world fall apart as it does in “World War Z,” and that made it sort of tricky when we were shooting. One half of the street would be completely annihilated with bodies hanging out of windows and the road all torn up while on the other side of the street, people are looking at us from the window of their apartment as they’re on the way to work.

What was it like bonding with your scene partners?

Alexa played my girlfriend in a film I shot last year [“2 Br/1 Ba”] and then later in February, when we started shooting “The Remaining,” she played my wife. I think we were the only actors who had worked together previously, but when we first got to our location in Wilmington, North Carolina, the director set up some “welcome to the set” days that allowed the cast to hang out with each other, riding bikes and going bowling. We got along great and shot a lot of footage on our cell phones that ended up being used for the opening credit sequence. The end of the world is definitely a bonding experience. There’s a lot of trauma, so you need a lot of good people around you to be supportive. Without this cast, I don’t think this film would feel anything like how it does. It’s so much about the characters and their relationships and friendships, and I think that’s what really resonates. I was happy to see so much of that chemistry onscreen when I finally got to see the film.

I have to ask you about a short you made in 2011 called “Dreams from a Petrified Head.” It looks fascinating and was directed by the same man who designed the creatures in “Splice.”

Our director, Daniel Ouellette, was a unit production designer by trade, and he’s a complete sci-fi nerd god. He sat us down with a bunch of things to watch—sometimes it was a Bjork music video and sometimes it was an obscure 1970s sci-fi film. “Dreams” is a very heady New York art film that has played mostly overseas, but I hope he has plans to make it available in a shorts compilation. The film is set in the distant future and my character, Jeremy, is an “editor” who’s assigned to take the memory of a [deceased] humanitarian resistance leader, Amanda, and edit the archives to cut out the details regarding what it means to live a human existence. We have digitized female escorts that can be customized, and mine takes the form of Amanda. She introduces me to all these human ideas such as love and makes me realize everything that I’m missing. Daniel’s story has a lot to do with our incredible dependency on technology and our remove from each other as people. The set resembled a futuristic compound and all of the walls outside the windows are green screen. It was very trippy and felt like we were in a little Stanley Kubrick box.

Tell me about your own directorial debut, the short film, “Rosie.”

Leslie-Anne Huff was my co-star in the film, “Dakota’s Summer.” When we were sitting in a Louisiana hotel room working on this film, I got into a long-winded rant about how we should be making our own stuff and how I’d be happy to shoot stuff for her, since my side profession/hobby is photography. I had a camera and said, “Let’s film some stuff and see what happens.” She took me up on the offer and wrote the script for “Rosie,” which is about a young woman just above the poverty line who’s trying to make it in Los Angeles. She takes over her mother’s shift as a housecleaner and it’s just about the extreme difference between the life she’s living and the world that she works within in order to get her paycheck. I’m also working on a film right now with my girlfriend, Amelia Rose Blaire, called “The Standing Dead,” and it’s about the position that we as a people have as stewards of this planet. If we’re given this incredibly unlikely occurrence of a plant that can sustain life in the universe, what changes do we have to make in order to ensure that we have a habitat for ourselves let alone for the rest of our species? Right now, California is in the worst drought we’ve ever seen. There are parts of Beverly Hills with lush lawns and fountains while other parts of California look like a dust bowl. It’s like something out of “Elysium.” In a lot of these apocalyptic movies, the world ends along with mankind. But this planet has an incredible gravitational pull—the earth isn’t going anywhere, it’s the people on it that need to be worrying about whether or not they get to stick around.

“The Remaining” is now playing in limited release. For more info on Bryan, visit his official site.