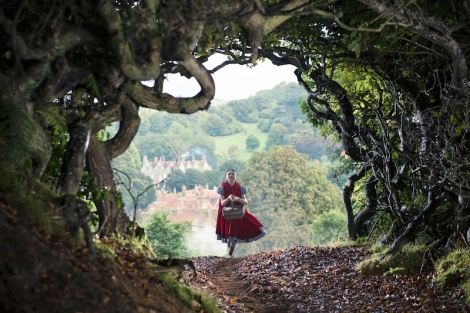 Lilla Crawford stars in Rob Marshall’s “Into the Woods.” Courtesy of Disney.

When writing about Stephen Sondheim and James Lapine’s “Into the Woods,” there’s no need to beat around the bush. It’s my favorite musical of all time. I first discovered the play during my sophomore year in high school, when I was cast as Cinderella’s distant and decidedly drunken father. It was a small role on the page, but I quickly learned that with Sondheim, there really are no small roles. To perform in a Sondheim musical is to participate in a joyous communal mosaic of intersecting melodies and deliciously complex lyrics rich with wit and poetry, resulting in ensemble numbers of dizzying euphoric splendor.

Prior to rehearsals, our theatre director, Heidie Dunn, had us watch the 1989 televised production directed by Lapine (who wrote the book) and featuring the original Broadway cast (led by Bernadette Peters and Joanna Gleason in her Tony Award-winning role). It is a masterpiece, pure and simple, and was rereleased this month on Blu-ray and DVD. We performed the musical in Spring 2002, with images of 9/11 still fresh and vivid in our minds. This brought tremendous poignance to the show’s second act, as its subversive spin on familiar faerie tales takes a jarring turn, abandoning all trace of formula, shattering the characters’ paths toward a seemingly inevitable happy ending and forcing them to rebuild their lives from the ground up. Their enemy, a bloodthirsty Giant, has a valid reason to be enraged, thus bringing moral ambiguity to its demise at the hands of our heroes. “Aren’t we to show forgiveness?” asks one wide-eyed character, who realizes that she is on her own—but not alone. As a 16-year-old facing the aftermath of a horrific terrorist attack while observing many of my fellow peers preparing to enlist in the army, I was asking the same questions.

The genius of Sondheim’s lyrics lies in their uncanny ability to resonate with straightforward clarity, while revealing provocative dimensions upon subsequent explorations, as all great artworks tend to do. I’ve returned to “Into the Woods” multiple times throughout my life and it has meant something different to me at every age—with certain sections proving all the more potent as I venture further into the uncharted forest of adulthood. I don’t think any lyric better reflects the epiphany one has after taking a momentary wrong turn in life than the line uttered by the Baker’s Wife, snapping herself out of the lustful trance administered by Cinderella’s faithless prince: “Just remembering you’ve had an ‘and’ / When you’re back to ‘or’ / Makes the ‘or’ mean more than it did before.” 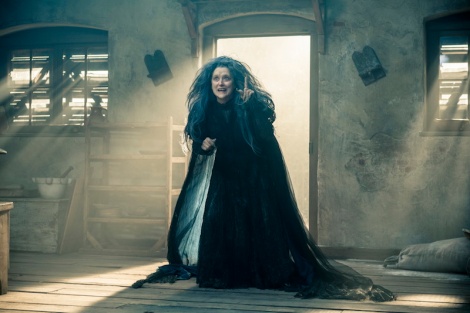 Meryl Streep stars in Rob Marshall’s “Into the Woods.” Courtesy of Disney.

After many failed attempts at bringing the musical to the big screen, “Into the Woods” is finally in theaters, and the reactions have been mixed. Some critics have complained that the picture goes off the rails in its third act—which is a compressed version of the play’s second half—and suggest that it should’ve just ended once “happily ever after” was intact, a decision that would’ve destroyed the entire purpose of the piece. The reason why the film noticeably drags in its final half-hour is because Disney—a company poised to own every entertainment-related endeavor short of Lars von Trier joints—dilutes the show of its edge and playfulness, though not quite to the extent that I had feared. The direction of Rob Marshall (who made “Chicago” a kinetic kick and “Nine” a gauzy bore) is perfectly serviceable, generic enough to disappoint but smart enough to somewhat compensate. Lapine’s script preserves the show’s thornier elements while allowing the film to work on its own terms. And the film does work, though considering the impeccability of its source material, anything less than one of the greatest musicals in cinema history must register as a missed opportunity.

With Disney set to release a “Cinderella” reboot in March, it’s maddening to see their logo headlining this film, as if no classic princess fable can go into mainstream distribution without their Mickey Mouse stamp branded on its behind. To the company’s credit, the film is not sanitized for all-ages consumption, but the filmmakers don’t have nearly enough fun with the material. The striking contrast between the lighter, funnier first half and the darkness of what follows is softened considerably, along with much of the humor. The film is ponderous when it should be buoyant, especially when the cast of characters are introduced. Cinderella (Anna Kendrick) wishes to attend the prince’s festival; Jack (Daniel Huttlestone) wishes to keep his beloved cow, Milky White, despite its lack of milk; Little Red Riding Hood (Lilla Crowford) wishes to visit her grandma and eat lots of cookies on the way there; the Wolf (Johnny Depp) wishes to eat Little Red; two princes (Chris Pine and Billy Magnusson) wish to obtain their desired damsels; the Witch (Meryl Streep) wishes to recapture her youthful beauty; and, at the center of it all, the Baker (James Corden) and his wife (Emily Blunt) wish to have a child. All enter the woods with the hope of getting their wish granted.

What’s surprising is how the film’s biggest potential box office draw turns out to be the most miscast member of the ensemble. Easily the most celebrated actress in American motion pictures, Streep is an astonishing chameleon, but singing has never been her forte. She simply does not have the pipes to do her larger-than-life role justice, and her disconcertingly subdued approach to her opening rap number—a showstopper in the hands of Bernadette Peters—falls flat. In fact, her best moments are the ones in which she evokes Peters, such as when she belts out the final chords of “Last Midnight.” The fact that Streep and Peters are the same age makes it all the more infuriating that Peters wasn’t cast instead. I teared up listening to audio excerpts of the original cast reunion that took place in November where the actors joined Sondheim onstage to reflect on the show and perform their signature tunes. Not only did they all sound phenomenal, but Peters’s voice sounded like it hadn’t aged a day. If she had been in that profitable 2008 turkey known as “Mamma Mia!”, she would be starring in this picture, while Streep would be finding work better suited for her abilities—instead of beaming herself into “The Giver” with all the half-heartedness of a phoned-in Captain Hook.

And now for the good news: Corden and Blunt are perfectly cast as the bread-baking couple who rightfully emerge as the film’s true leads. Bearing a resemblance to John C. Reilly, Corden is lovable even as his impotent character irritates, insisting that his wife leave him alone while displaying little interest in his child (“I’ll take care of him when he’s older”). A key lyric is tweaked to underline how the Baker’s lack of a father figure formed his ambivalent attitude toward fatherhood. Tom Aldredge’s dual portrayal of the Baker’s father (a.k.a. “the Mysterious Man”) and the gleefully detached Narrator are sorely missed here—both roles are shortened practically into oblivion, a primary reason for why the film runs a half-hour shorter than the play (the haunting “No More” is reduced to a minute of artless exposition). Pine and Magnusson’s uproarious duet, “Agony,” is cleverly staged on a waterfall, allowing the charmingly clueless princes to strike preening poses, splash around and rip open their shirts with competitive zest. The film springs to its most vibrant comic life here, so it’s especially disappointing that the even more hilarious “Agony” reprise is axed, along with my favorite line, “Dwarves are very upsetting” (for the record, Sondheim’s favorite punchline, “We are moving!”, was also cut).

Watching Blunt perform “Moments in the Woods,” conveying every conflicted nuance of the inner journey taken by the Baker’s Wife, is magical. On the heels of her Broadway triumph as Annie, Crawford nails Little Red’s deadpan demeanor and budding wisdom. Her one big scene with Depp’s wolf is squirm-inducing in all the right ways, since no effort has been made to tone down the predatory, pedophilic subtext of the beast’s unquenchable appetite. Casting Depp raised many red flags, leading people to speculate whether the slight role of the Wolf would be expanded, inviting the overused actor to indulge in his increasingly tiresome brand of hamminess. Turns out this theory couldn’t be further from the truth. Depp is magnificently creepy, never more so than when Crawford surveys him in his granny guise (“Why, Grandma, what big ears and mascara-laden pirate eyes you have!” “All the better to mug at you with, my dear!”). This does lead, however, to the silliest of the film’s flashbacks, which are otherwise used nicely by Marshall to visualize events illustrated only in the lyrics. When Crawford sings “I Know Things Now” with Annie-esque exuberance, we actually see Little Red and Grandma huddling together in the Wolf’s stomach—a scenario best left to the imagination.

Somewhat lost in the shuffle is Kendrick, a genuinely gifted singer set to mesmerize audiences in “The Last 5 Years” when it’s finally released Valentine’s Day weekend. Her Cinderella is a tad lackluster and only really gets to shine during her showcase number, “On the Steps of the Palace.” Christine Baranski is a pleasingly deranged stepmother (as expected), and “Harry Potter” fans will appreciate seeing Hagrid’s girlfriend Frances de la Tour stumbling about as the Giant. The most criminally wasted person in the cast is Tracey Ullman, a hugely gifted comedian in a hugely funny role sapped of its funniness. All her best lines have been removed, leaving her with nothing to do but kvetch and slap Jack in the back of his precocious head. And yet, despite its glaring flaws, the film still gave me an enormous amount of joy, and the majority of it was all due to Sondheim and the effect his work can have on an audience. I loved hearing the lyric, “This is ridiculous! / What am I doing here? / I’m in the wrong story!”—the one dreamed up by Joanna Gleason—garnering laughs when sung by Blunt. I loved the silence that greeted the film’s surprisingly tender and sublimely bittersweet finale. And I loved the resounding applause that followed, a sure sign that the film, for all its shortcomings, had managed to succeed after all. I just wished Gonzo and Rizzo had materialized onscreen after the final fade out to say, “If you like this, you should see the play!”

In addition to the original Broadway cast performance of “Into the Woods,” moviegoers with a hunger for Sondheim should check out Lapine’s masterful HBO documentary, “Six by Sondheim,” an invaluable collection of interviews with the icon and analyses of six classic songs, including “Being Alive,” performed with ferocious intensity by Dean Jones.