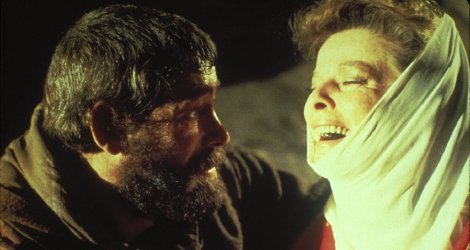 When master cinematographer Douglas Slocombe passed away last month at age 103, tributes began pouring in from cinephiles around the globe, many of them citing his infamous work on the first three “Indiana Jones” films (he retired after “Last Crusade”). Yet these are far from the only highlights in his esteemed filmography, which also includes such classics as “Kind Hearts and Coronets,” “The Italian Job” and “Jesus Christ Superstar.” My favorite of them all may be Anthony Harvey’s 1968 picture, “The Lion in Winter,” which was adapted by James Goldman from his hit Broadway play. The film is billed as a historical drama—which it is, no question—but it also happens to be very, very funny.

This was only Harvey’s second directorial effort after editing Stanley Kubrick’s “Lolita” and “Dr. Strangelove.” In his audio commentary track, recorded in 2000 and available on the film’s otherwise bare-bones DVD (paging Criterion!), the director emphasizes the importance of austerity when it comes to his visual approach. He detests fidgety cameras, though when adapting a play, he believes that it’s crucial to break the proscenium arch, enabling the audience to become a part of the action. Slocombe does indeed get very close to his subjects, holding his lens on their faces in elegantly staged long takes, which Harvey favored because they gave actors a “chance to build up steam” when delivering monologues.

This technique proved to be an enormously effective method for showcasing the brilliance of the film’s actors, especially Katharine Hepburn, who shifts seamlessly between watery-eyed vulnerability and steely malice in several exquisite unbroken shots. She deservedly won her third Oscar for this performance (tying with Barbra Streisand for “Funny Girl”), which is, in my opinion, the peak of her unparalleled career. Here’s a woman whose comedic chops (in screwball landmarks like “Bringing Up Baby”) were every bit as sharp as her dramatic ones (her devastating turn in “Long Day’s Journey Into Night” comes to mind), and you won’t find a better showcase for both than her role as Eleanor of Aquitaine, a duchess who has been temporarily freed after a decade-long imprisonment by her husband, King Henry II (Peter O’Toole), just in time for the holidays.

In many ways, “The Lion in Winter” is the ultimate dysfunctional family comedy, setting the bar for a slew of yuletide perennials, as well as ensemble-driven serials like FOX’s “Empire.” Henry’s brood is comprised entirely of backstabbing schemers, each vying to fill their father’s shoes in a deadly game of thrones. “I have a confession,” Eleanor witheringly observes. “I don’t much like our children.” And who could blame her? Their three sons are John (Nigel Terry), a pouty cretin with the mouth of the Angry Video Game Nerd; Geoffrey (John Castle), a natural born sociopath; and Richard (Anthony Hopkins), whose closeted status renders him an outcast. Also circling the kingdom like a vulture is King Philip II (Timothy Dalton), a former lover of Richard’s. And let’s not forget Alais (Jane Merrow), Philip’s half-sister and Henry’s current lover. In an early scene, she explains to Henry that she can’t be his mistress if she’s betrothed to marry his son—Richard, of course.

The more these tangled familial relations grow askew, the more unsettling and amusing the film becomes. Absurdity is all the funnier when served with a straight face, and that very principle appears to have governed Goldman’s Oscar-winning screenplay, which is chockfull of uproarious lines that are delivered by the cast with deadpan relish. Consider how Henry and Eleanor smile at their adoring public, while launching ultimatums at one another through clenched teeth. “Henry, did you ever love me?” Eleanor asks. “No,” Henry curtly answers, to which she replies, “Good. That will make this pleasanter.”

Henry wants John for the throne, and Eleanor wants Richard, yet this incessant quarreling all seems like a smokescreen for what they really want, which is each other. The theme of performance resonates throughout each interaction, as the characters deceive one another with theatrical zeal. After one of her emotional outbursts, Henry breaks into exaggerated applause that evokes the labored clapping of Charles Foster Kane. There’s even a flash of Norma Desmond in Eleanor toward the end, as she acknowledges the countless eyes watching her “out there in the dark.” Beneath all the hell-raising and betrayal, there is a real sense of tenderness between Henry and Eleanor that neither of them can deny. When she claims that she wants to die, his consolation is priceless: “You will, you know, someday. Just wait long enough and it will happen.”

O’Toole is excellent here, with his fierce physicality and volcanic rage (the MGM lion sets the tone for his performance), though he’s no match for Hepburn’s lioness. Next to her, he’s as helpless as Ralph Kramden, growling up a storm without leaving a single bite mark on his prey. “I’m like the earth, old man,” she tells Henry. “There isn’t any way around me.” Very few films have made me laugh out loud as many times as “The Lion in Winter,” and that is largely due to how Hepburn takes Goldman’s dialogue and wraps it around her scene partners like a snake. Here are a few more standout lines:

“Dear dear, whatever shall we do with mother.”

“Henry’s bed is Henry’s province. He can people it with sheep for all I care—which on occasion he has done.”

“I could peel you like a pear and God himself would call it justice.”

[holds up a piece of extravagant jewelry to her chest] “I’d hang you from the nipples, but you’d shock the children.”

How fitting that a film about royalty—both veteran and aspiring—would feature veteran Hollywood royalty (Hepburn and O’Toole) and soon-to-be Hollywood royalty (Hopkins and Dalton, both making their film debuts). Hopkins is riveting the instant he appears on camera, removing a mask (foreshadowing his iconic role as Hannibal Lecter) and raising a sword above his head, all the while nursing a broken arm, which occurred during an onset accident. If anything, his physical agony appears to have enhanced his portrayal of the chronically tormented Richard. He also earns one of the film’s biggest laughs at the expense of John, whose crude language (“You turd!” “You’re a stinker and you stink!”) is all the more conspicuous when juxtaposed with the eloquence of his brothers. In a typical self-pitying rant, John cries, “If I went up in flames, there’s not a living soul that would pee on me to put the fire out.” Richard looks down at him and quips, “Let’s strike a flint and see.”

Soon after, Geoffrey chats with Eleanor, and makes an observation so brain-twisting, even M.C. Escher would find himself lost in it: “I know. You know I know. I know you know I know. We know Henry knows, and Henry knows we know it. We’re a knowledgable family.” And if Hallmark sold cards that were intended for one’s enemies, they would be wise to borrow this hilariously venomous gem spat out by Alais during a tense fireside chat with Eleanor: “Do you know what I should like for Christmas? I should like to see you suffer.”

But it is Hepburn who brings down the house with the absolute best line of the movie. Faced with the prospect of Henry taking a new wife, she revives the rumor that she had once slept with his father, forcing him into a state of hyper-anxiety. She writhes on the bed with orgasmic pleasure, recounting her memories of his father’s body until Henry can no longer stand any more. He bolts from the room, retching and staggering, as Eleanor crawls after him, screaming that she had sex with his father when he was in the next room. She then props herself up in the doorway, waits a few wordless beats and then sighs, “Well, what family doesn’t have its ups and downs?”

Whenever I think of Katharine Hepburn, this is the moment that comes to mind first, and Slocombe’s camera captured it in all its glory. There are so many ways this script could’ve come off as stagey, but the cinematography makes it gripping from beginning to end, kicking off the film with a striking shot of swords clashing against a vibrant blue sky. Slocombe’s assured lensing of action, conveying the visceral sensations felt by the characters (complete with a POV shot of O’Toole pointing his sword directly at the viewer), would come in handy once he began his collaborations with Spielberg. Lending a brooding majesty to the proceedings is the Oscar-winning score by John Barry (“Goldfinger,” “Out of Africa”), featuring a choir that would find itself entirely welcome in “Temple of Doom.” Barry’s music externalizes the suffering that Eleanor often conceals behind her smile, which she admits is her way of registering despair. Perhaps that’s why Eleanor was the role Hepburn was born to play. She breaks our hearts even as we’re roaring with laughter.

One response to “Roaring with Laughter: “The Lion in Winter””