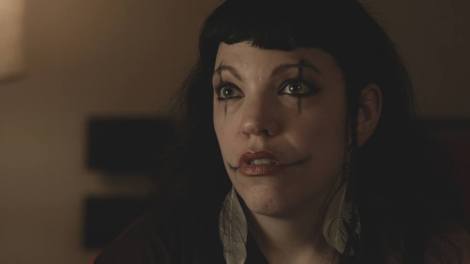 I’ve often thought of Sadie Rogers as Stephen Cone’s good luck charm. She would always pop up in his early films, including “The Wise Kids,” which is one of the wisest films about people of faith I’ve seen. Now Rogers is taking her turn behind the camera with Cone serving as her editor. Her first directorial effort, “Alien Brides,” was an eerie yet endearing short featuring Rogers and Carolyn Hoerdemann, and was enhanced immeasurably by Mikhail Fiksel’s moody score. Her second short, “RPG,” is having a great festival run, and stars several fantastic actors that I have previously interviewed on Indie Outlook: Danny Rhodes, Shane Simmons, Marty Schousboe and Maggie Suma. The film centers on a group of Dungeons & Dragons players as they strain to connect with one another in the quiet intervals between their emotionally charged game. Rogers’ character secretly pines for a soft-spoken guy at the table played by Bob Kruse. The cinematography for both films was provided by Eon Mora, a longtime friend of Rogers who is currently working on Joe Swanberg’s upcoming Netflix series.

I met Rogers at the coffee shop Julius Meinl, which has become one of my favorite places near Chicago’s Music Box Theatre, and we spoke about filmmaking, D&D and virtual reality.

What inspired the story for “RPG”?

Before I wrote it, I was waiting tables at this very shop, and there was a chess club that would always meet here on Monday nights. The group consisted of five dysfunctionally nerdy older guys and they were incredibly rude to me. I was fascinated by them. One night, they got into a dispute and decided to let their president know that he had been voted out. The shop was practically empty, aside from one other table of customers, the manager and myself, so we could hear everything. It turned into a big fight, and the man threatened to kill himself. He said, “This club is all I have.” After closing time came, the guys continued to argue in the street. It was so heartbreaking. The following Monday, the former club president came in, sat down and ordered his smoothie that he ordered every week. It was a smoothie that we don’t even make, by the way, we made it only for him. He sat there for an hour and a half at the big table, and nobody ever came. I based “RPG” on this idea of a game being so important in the lives of those who play it, and how the game continues in spite of the missed connections that occur between the players.

How did you go about researching Dungeons & Dragons?

I would get a glass of wine and just look up videos online of people playing D&D at home. It can be very boring, but I loved it. There are even “Celebrity D&D” videos, featuring not celebrities but “D&D celebrities.” I didn’t become a D&D player until after I wrote the script. Bob was the only person in the film who actually played D&D, and he was a huge help in ensuring that we maintained accuracy with the game. D&D is totally thrilling when you’re actually at the table. You don’t play to win, you play to collaborate. You work as a team, whereas with chess, you are competing. My character may not get the guy, but she still loves the game so much that she’s willing to go back in and collaborate. Shane’s character was inspired by a true story someone shared with me during my interviews with D&D players. This person was at a game where one guy got so mad that he stormed out, but he forgot his helmet so he had to come back. [laughs]

It seems that fantasy role-playing has become more commonplace in our society, whether it be in the form of LARP or video games.

Yeah, the willingness to transcend yourself and inhabit these characters has become quite trendy and normal, whereas it used to be something that you would associate with obese dudes and Goth girls in Middle America. The guys at my warehouse job all play “World of Warcraft.” In my opinion, this is how society has begun to prepare itself for the virtual reality world that we are about to join, where anybody can be anybody. I’ve become obsessed with it after reading William Gibson’s Sprawl trilogy.

What’s interesting about your work is how it grounds elements of sci-fi and fantasy within narratives that are primarily concerned with subtle human interactions.

That is exactly my goal. With “Alien Brides,” I wanted to write about what would happen to the spinsters of the world like me and Carolyn—she’s in her 40s, I’m in my 30s—if aliens attacked. The answer would be nothing, probably. I want to write a short film in the sci-fi cyberpunk genre that’s actually a character piece about the bond between a 45-year-old mom and a 30-year-old AI. I really feel that AIs are something that we will start to see quite often, and they will become relatively conscious. This AI has been stuck in the virtual world forever, and is bored out of her mind. Her consciousness has been created and is intact—but to what end? The mother meets the AI after she journeys to the virtual world to find her 18-year-old son. He has hidden his body and placed it on life support, opting to live the rest of his days in the virtual world, where he has fallen in love with a [synthetic] woman. 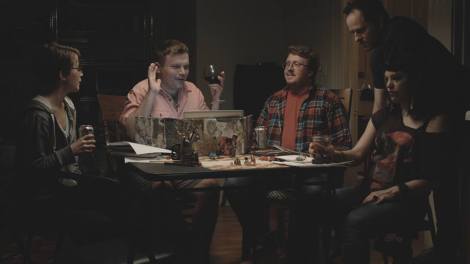 What led you to use the song “Priestess of the Goddess” by Rasplyn (the solo project of Carolyn O’Neill) for the last scene in “RPG”?

I initially had whimsical action music in mind for “RPG,” because the film was originally going to end on a happy note. Then when I came across Carolyn’s work, I realized that the film shouldn’t end happily, and that her music was perfect for what I wanted to convey. The audience should feel the weight of the world that these players are carrying while in the game. Our sound designer, Stephen Lynch, added some extremely subtle street sounds right before the music starts to swell, and it created a nervous tension that I really like. During the edit, I adjusted the music ever so slightly in order for it to be in sync with this one eye movement that my character makes.

Bob reminded me of someone who would break a girl’s heart in that situation, and there’s something about his awkward stance at the table that just felt so right. I wrote the last scene in two huge paragraphs the morning before we shot it. It was essentially an argument between Danny and Marty about parallel times, and I didn’t expect them to have it fully memorized. They looked it over and got familiar with it, while Bob and Maggie were instructed to just play off of them in the scene. The ending was originally going to show Bob’s character walking off into the shadows and disappearing forever, as if he entered the fantasy world. It didn’t work, so I rewrote it quickly. Everything else in the film was tightly scripted.

I was intrigued by your choice in having the end credits roll over the final shot.

Honestly, I wasn’t going to do that, but I really wanted people to watch that drawn-out argument. I got feedback from a couple people who said that the short needed to end earlier, but I really felt that I needed to draw it out. In order to keep the audience watching, I decided to roll the credits over the footage, and I added the D&D character names for comedy, and it worked great. I could hear the audience laughing during screenings, and it was clear that they were still engaged. I think it saved the short because before the credits were added, it felt like the film was drifting off a bit.

That ended up being my favorite part of the film, along with the stairwell scene, which was scripted to be totally different. It’s supposed to be a make-out scene between Marty and Maggie. He asks if he can kiss her and she goes, “Yeah.” He moves up and the camera is supposed to hold on them for a long time. She slaps him across the face and then they kiss. Something went wrong with the camera when we shot the scene, so I had to call the actors back to reshoot it, which is so mean. “Hey, remember that weird kissing scene you did? Let’s do it again!” [laughs] I ultimately felt like the kiss didn’t work. David Dastmalchian, who wrote “Animals,” told me in an e-mail that the kiss didn’t work for him either, and that’s what led me to cut it. I love how the scene plays now.

What have been some of the most memorable public screenings of “RPG”?

My mind was blown when I saw the film at the Palm Springs International Film Festival. When it was over, people kept coming up to talk with me. An old man said, “Keep it up, keep it up,” an old woman hugged me and said, “I totally understand your character,” and another woman was like, “Your makeup made the movie.” There were so many positive responses and I got so excited. Then the festival put the film into a program of shorts called Games People Play, which featured various stories about games, including one about a murderer who plays checkers. I never knew that film festivals could be so fun. When “RPG” later played at the Music Box alongside Zach Livingston’s “Charger,” that was so amazing. The whole venue was packed with fight choreographers and stunt people because they were there for “Charger,” and they ended up being the perfect crowd for a D&D short. [laughs] It was a great night.

“RPG” will be featured on the site, Short of the Week, beginning Tuesday, June 14th. “Alien Brides” is available to view on Rogers’ Vimeo page. You can also follow her band, Sadie and the Stark, on Facebook.