Movie lovers in the Windy City have a massive treat in store for them when the Chicago International Film Festival kicks off this week. Boasting the strongest line-up in recent memory, CIFF 2016 will screen several of the best films I saw at last month’s Toronto International Film Festival, including Asghar Farhadi’s “The Salesman,” Cristian Mungiu’s “Graduation,” Mijke de Jong’s “Layla M.”, Paul Verhoeven’s “Elle” and Steve James’ “Abacus: Small Enough to Jail.” Throughout the next two weeks, I’ll be writing dispatches for RogerEbert.com that cover such CIFF highlights as Nathan Adloff’s “Miles,” Caitlin Parrish and Erica Weiss’ “The View from Tall,” Kirill Serebrennikov’s “The Student,” Monica Lãzurean-Gorgan’s “A Mere Breath” and Shawn Convey’s “Among Wolves.”

With the festival’s opening night ceremony mere days away, here are five of the fest’s most anticipated selections, at least two of which are guaranteed to be major players during this year’s awards season. 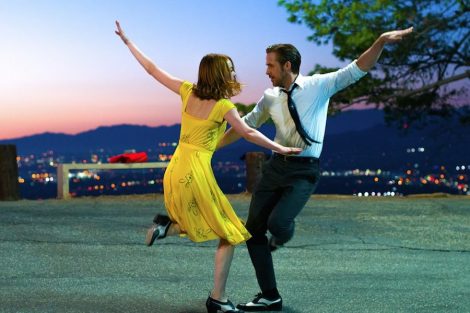 To say Damien Chazelle’s new musical is the strongest opening night film at CIFF in ages would be an understatement of unfathomable proportions. This film had me floating from its first jaw-dropping number set amidst stalled L.A. traffic, and it took several days for my feet to fall back onto solid ground. When I interviewed Chazelle two years ago, just before the theatrical run of his crowd-pleasing Oscar-winner, “Whiplash,” he spoke of his desire to forge a relationship with a composer much like the one Jacques Demy had with Michel Legrand when they made 1964’s “The Umbrellas of Cherbourg.” Considering what Chazelle and his composer, Justin Hurwitz have achieved here—capturing the euphoric splendor of Hollywood classics while fusing it with the director’s visceral style and tireless audacity—my response to them is a resounding ‘mission accomplished.’

Emma Stone is utterly luminous as a struggling actress who falls for a jazz pianist (Ryan Gosling at his most charismatic), a character not all that far removed from Miles Teller’s protagonist in “Whiplash.” Chazelle’s 2009 feature debut, “Guy and Madeline on a Park Bench,” clearly served as the low-budget model for this film, with its spontaneous energy and exuberant approach to staging (such as when the camera pans back and forth between two parallel performances), though the narrative is also reminiscent of Jason Robert Brown’s equally bittersweet “The Last Five Years.” The balance between starry-eyed artifice and aching reality is impeccably navigated by Chazelle, who at age 31 has crafted an old-fashioned triumph no less intoxicating than the ones routinely broadcast on Turner Classic Movies. Keep your eyes peeled for priceless cameos from J.K. Simmons (essentially reprising his “Whiplash” role) and Tom Everett Scott, best known as the drummer and jazz enthusiast in Tom Hanks’ “That Thing You Do!”

There is a scene in Jim Jarmsuch’s 2005 gem, “Broken Flowers,” in which Bill Murray sits in a bus, wearing sunglasses while eavesdropping on the young women sitting across from him. As he listens to them gush about some guy, Murray’s mouth curls into a discreet grin. His life has become haunted by the ghosts of past relationships, and the words of these girls echo the gossip that had once centered on him. Jarmusch’s latest film is filled with moments like this one, in part because its titular character (Adam Driver) is a bus driver. His name is Paterson, he lives in Paterson, New Jersey, and one of his most prized books sitting atop his shelf is Paterson, the epic poem by William Carlos Williams that sets the tone for Jarmusch’s delightful and entrancing picture. Mark Friedberg, the genius production designer of “Synecdoche, New York,” fills the frame with witty details, many of which offer variations on the distinctive designs of Paterson’s girlfriend (Golshifteh Farahani). Many amusing characters materialize, such as Paterson’s perpetually unhappy boss (Rizwan Manji), and two aspiring anarchists played by the pint-sized lovebirds from “Moonrise Kingdom” (Jared Gilman and Kara Hayward). Several pairs of twins are also observed, as are the Paterson Falls, a key image in Williams’ work that serves as an indirect inspiration for one of the film’s loveliest instances of poetry.

One Day Since Yesterday

In addition to screening a new digital restoration of Peter Bogdanovich’s 1981 romantic comedy, “They All Laughed,” the festival will also show Bill Teck’s documentary about the film, which would make a stellar extra on a sorely deserved Criterion release. The murder of the film’s co-star (and Bogdanovich’s lover), Dorothy Stratton, cast a pall over the lighthearted picture and the director’s career, which never fully recovered. Teck interviews numerous high-profile fans of the film, most notably Noah Baumbach, whose own documentary, “De Palma,” similarly immersed viewers within a period where the industry allowed personal visions to be realized. In some ways, Baumbach’s own infatuation with Greta Gerwig mirrors Bogdanovich’s feelings for Stratton, and the sense of a filmmaker being in love with his leading lady is every bit as tangible in “Frances Ha” as it is in “They All Laughed.” The most memorable moments in Teck’s film take the form of touching anecdotes, such as when Bogdanovich recalls how John Cassavetes invited him to direct a few shots of “Love Streams” just to get him out of the house. It’s also lovely to see the dearly departed Ben Gazzara and Andrew Sarris among the multitude of talking heads. Like “De Palma,” “One Day Since Yesterday” is guaranteed to keep your Netflix queue filled to the brim with essential viewing.

“One Day Since Yesterday” screens Sunday, October 16th, at 5pm, as part of “A Tribute to Peter Bogdanovich.” Peter Bogdanovich is scheduled to attend the screening and receive the Gold Hugo Lifetime Achievement Award.

One of the most despairing films I saw at Toronto this year was Vikram Gandhi’s “Barry,” a portrayal of Barack Obama’s college years. Any attempt at making this story an inspiring one rang false for me, considering how Obama’s outsider status in his youth carried over to the White House. The Australian actor cast as Obama, Devon Terrell, sounded so much like the President does now that it was impossible for me to separate the plot from its political baggage (Anya Taylor-Joy fared much better as his poorly treated girlfriend). A considerably more satisfying film about a young man grappling with his faded origins and identity is “Lion,” the distinguished first feature from “Top of the Lake” co-director Garth Davis. Based on the memoir by Saroo Brierley, the film devotes much of its first half to chronicling the plight of an Indian boy (Sunny Pawar) as he finds himself whisked far from home and left stranded on the streets of Calcutta.

Once he is adopted by Australian parents, the film jumps ahead 25 years, with the protagonist now being played by Dev Patel (receiving his finest showcase since “Slumdog Millionaire”). His life has been blessed with miraculous good fortune (not to mention a girlfriend played by Rooney Mara), yet the need to reconnect with his past soon becomes too powerful to deny. How the story resolves itself would seem like a cop-out had the film not been fact-based, and it ultimately serves as a testament to how modern technology has shrunken our world while simultaneously expanding it. Mara will soon play the titular role in Davis’ “Mary Magdalene,” starring opposite Joaquin Phoenix (as Jesus), whom she was fleetingly paired with in Spike Jonze’s “Her.” Speaking of Jonze, the cute scene of Mara and Patel dancing down the sidewalk appears to have been lifted from the director’s short, “How They Get There,” though thankfully it doesn’t have the same ending.

The first interview that I conducted for RogerEbert.com was with Tishuan Scott and Ashton Sanders, the stars of Chris Eska’s superb Civil War-era drama, “The Retrieval.” It was the first film featuring Sanders, a DePaul student who described the production as “a spiritual experience.” The same could be said of Barry Jenkins’ “Moonlight,” a mesmerizing character study zeroing in on three pivotal moments in a man’s life as he comes of age. Sanders inhabits the lead role during the film’s central section, and his performance is easily one of the year’s best—exuding tremendous sensitivity as a teenager ashamed of his closeted orientation, while drifting into his first sexual encounter with a friend (Jharrel Jerome). Yet the actor is equally convincing when his character is required to demonstrate ferocious strength, culminating in a cathartic moment that had people applauding at the press screening I attended.

Each section of the film is named after the latest identity taken on by the main character, who grows from a young boy (Alex Hibbert, eerily resembling Sanders) to a troubled man (Trevante Rhodes, resembling Mahershaka Ali, who plays the boy’s temporary guardian in the film’s first section). A flickering light materializes in between each act, and its morphing color isn’t coincidental. This is only Jenkins’ second feature (after 2008’s “Medicine for Melancholy”), and it displays the poetic nuance of an assured master. Utilizing Tarell Alvin McCraney’s short theatre piece, “In Moonlight Black Boys Look Blue,” as its source material, Jenkins’ film illustrates just how much is lost when filmmakers attempt to encompass a life with the encyclopedic detail of a sprawling novel. As good a film as “Lion” is, it has so much story to cover that it barely has time to allow individual moments to breathe, or even adequately develop the relationship between the boy and his original family prior to their separation. “Moonlight” only provides us with three lingering glimpses at its protagonist, yet they are each so vividly realized that they leave us feeling as if we know the man in full.