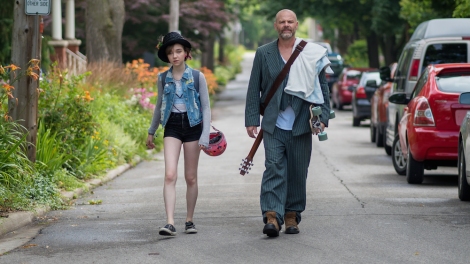 Mitch is having a really bad day. His infertility combined with his job at a go-kart track—not to mention his choice of clothing—has caused him to feel more like a kid than a man. Frustrated by a nagging sense of inadequacy, Mitch stumbles upon a returned letter written by his wife, Jackie, to her former co-worker, Danny. Turns out Danny is the real biological father of the couple’s red-headed toddler. This dramatic revelation sends Mitch on the road, determined to track down the guy and…reclaim his manhood, I suppose. But once a bird soars directly into his windshield, the agony Mitch endures starts to inch itself ever so slightly into the absurd. We’re reminded of how laughter can suddenly erupt from a mouthful of sobs, and how our own emotions can often take us by surprise.

Such is the setup for “The Space Between,” a feel-good Canadian comedy that marks the feature directorial debut of Amy Jo Johnson, an actress best known to American audiences from my generation as the Pink Ranger on “Mighty Morphin Power Rangers.” I didn’t grow up with the show myself, but I am a major fan of two films that appear to have been woven into this picture’s DNA. As in Jonathan Dayton and Valerie Faris’ “Little Miss Sunshine,” Johnson populates her dysfunctional family with lovable misfits and punctuates their odyssey with a whimsical soundtrack (there’s even a yellow vehicle, albeit a much smaller one). Yet I was reminded even more vividly of Jason Reitman’s “Juno,” which tackled the topic of teenage pregnancy with a cheerful optimism that demolished any societally imposed stigma in its path. The same could be said of “The Space Between” in how it deals with issues of infidelity and betrayal. It doesn’t belittle them so much as adopt the philosophy voiced by Juno’s mom that there’s bound to be “a precious blessing from Jesus in this garbage dump of a situation.”

What makes Johnson’s characters so appealing is their lack of mean-spiritedness toward one another. Mitch, as played by Michael Cram, is reacting not out of hatred but a deep-seated sadness and insecurity, while Jackie (Sonya Salomaa) honestly believes that what she did was in her husband’s best interest. There’s more than a hint of Allison Janney in Maria Ricossa’s amusing portrayal of Dinah, Jackie’s uninhibited mother who exudes the vibrance of youth in her burlesque performances and spirited courting of Nick (Michael Ironside), the father of her daughter’s friend, Amelia (Johnson, in a very funny turn). As this colorful ensemble sets out in search of Mitch, Johnson constructs a series of elaborate misunderstandings that culminate in many of the film’s biggest guffaws. I especially loved Kristian Bruun of “Orphan Black” fame as a mortician who manages to dig a deeper hole for himself with every misjudged line that leaves his mouth. I naturally find myself gravitating toward the more exasperated characters in a farce such as this, and I found plenty to savor in Johnson’s performance, from her understated exclamation of “Jee-Zahs!” to her petrified reaction when faced with a sight no daughter should have to witness.

The trickiest role in the picture, by far, is that of Emily, a 19-year-old woman harboring a tremendous amount of anguish beneath her self-assured façade. We first see her literally at the end of her rope, preparing to hang herself from a tree, when Mitch unknowingly disrupts the impending tragedy. As soon as Emily spots Mitch, she takes an immediate interest in his plight, embracing his problems as a distraction from her own. Her confidence is so convincing that it causes us to question whether she was indeed suicidal, until the camera lingers on her face during a private moment, and the vulnerability materializes once again. This character could easily come across as phony in the hands of a less gifted performer, but Johnson made the wise decision of casting Julia Sarah Stone, who affirms her status here as one of the best actors of her generation. I first saw Stone in Lindsay MacKay’s masterful coming-of-age drama, “Wet Bum,” and was astonished by the depth and nuance of her performance. Last year, I got the chance to interview Stone at the Toronto International Film Festival, where she lit up the screen in Bruce McDonald’s black-and-white charmer, “Weirdos.” One of her answers that stuck with me was her observation that “a scene is just an honest interaction between people.” If there is any one thing that has defined Stone’s work thus far, it’s the unflinching honesty she brings to each moment. She illuminates the underlying needs of her character without ever having to articulate them. We believe in her, and therefore believe in Emily as well.

Where Johnson shines the brightest as a writer/director is in how she handles the scenes between Mitch and Danny, who is played in a thoroughly winning performance by Evan Marsh. There are any number of hackneyed ways in which the showdown between these two men could’ve been staged, and Johnson avoids all of them. Instead, she and Marsh instantly endear us to Danny as he innocently locks eyes with Mitch. He’s not at all the sort of cocky hunk we had been expecting. He’s more like Paulie Bleeker’s Irish half-brother. Once Danny realizes who Mitch is, his guilt rises to the surface with aching authenticity. When Mitch socks him in the face, it registers as little more than a hollow formality, and only a beat passes before the men commence their polite conversation. Funny how animosity can dissolve when confronted by foibles bereft of malice.

Had “The Space Between” simply coasted on the quirks of its characters, it likely would’ve collapsed under the weight of various contrivances, such as the all-too-tidy final twist. But Johnson and her cast are after more than mere escapism. This is a film about the messy truths we must accept in order to move forward in our lives. There isn’t only one way to form a family, just as there isn’t only one way to be considered a man. Accepting the imperfect beauty of our existence is infinitely preferable to remaining mired in life’s proverbial garbage dump.

“The Space Between” will be screening at 7pm on Thursday, September 7th, at The Picture Show in Bloomingdale, Illinois, with Amy Jo Johnson in attendance. For more info and tickets, click here.