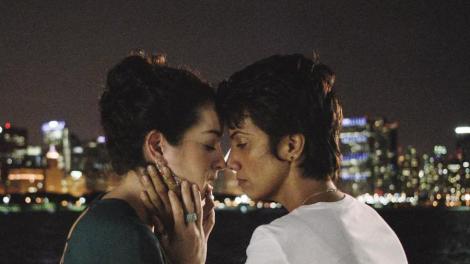 One of the most buzzed-about Chicago indies in recent memory is “Signature Move,” the latest feature from prolific filmmaker Jennifer Reeder. It stars the wonderful comedian Fawzia Mirza as Zaynab, a thirty-something Pakistani woman who serves as the caretaker for her mother, Parveen, played by Indian New Wave icon Shabana Azmi. Reeder’s film is the first movie produced by the great Chicago publication, Newcity, as an experiment to highlight Windy City artists both in front of and behind the camera. The ensemble is loaded with sublime local theatre talent, including Black Ensemble Theatre member Mark Hood and Malic White of The Neo-Futurists (not to mention Stephen Cone’s latest picture, “Princess Cyd”).

Carrying echoes of another indie charmer, Michael Showalter’s “The Big Sick,” “Signature Move” is an endearing slice of life set in Chicago’s Little Village neighborhood, celebrating the textured lives of the city’s immigrant community. Sari Sanchez plays Alma, a Mexican women whom Zaynab becomes infatuated with, leading to a romance that won over the crowd at this year’s Outfest, where the film earned the Grand Jury Prize for U.S. Narrative Feature. At a local premiere screening held this past Friday, I got the chance to chat on the red carpet with Reeder, Mirza and Sanchez. In addition to producing the picture along with such major Chicago figures as Newcity editor/publisher Brian Hieggelke and Oscar-nominated actor Michael Shannon, Mirza also co-wrote the script with fellow filmmaker Lisa Donato.

“Lisa and I have a fantastic creative energy together,” said Mirza. “She cast me in a film that she wrote and directed called ‘Sugarhiccup,’ and we knew onset that we needed to work together again. I had a short film called ‘Signature Move’ that I wanted to turn into a feature, and I had about ten days to do it. So I called Lisa up and asked, ‘Do you want to come to L.A. and write a feature in seven days?’ And she said, ‘Yeah,’ because she’s crazy. We are good at different things, and like any good relationship, you work with each other’s strengths in order to make magic together. She’s great at structure, I’m good with dialogue. I have this brown experience, and she has a niece who is Mexican. We’re also both queer women who are struggling to figure ourselves out.”

“I am Mexican-American, and I hadn’t realized how many similarities there were between South Asian culture and Mexican culture until I made this film,” said Sanchez. “I’ve played very sexy characters before. It’s a dominating part of their personality or their lives. What was interesting about my character in this film, which was written by two women, is that she is a business owner, a daughter, a friend and a sister. She’s all these other things, and she’s also a little bit sexy, but her sensuality doesn’t define her. As an actor, you audition all the time and don’t find a lot of good roles. I love being sexy, and I love that part of myself, but that’s just one part of who I am. I often get overlooked because of the color of my skin, which is mixed, but culturally, I identify as a Mexican-American. On this production, the filmmakers were looking to cast a real Mexican woman, not just a Latina woman. There are so many different kinds of Latina women, but they wanted to make the character of Alma authentically Mexican.”

Reeder and Mirza were also adamant about portraying Zaynab’s profession as a Lucha-style wrestler with as much authenticity as possible.

“I wanted the wrestling to be believable onscreen,” said Reeder. “We had two sets of professional female wrestlers who were actually throwing each other on the mat, along with two stunt doubles plus a stunt coordinator. There were two full days of rehearsals for the action that occurs in the ring. Especially since these wrestlers are women, I wanted it to feel like they were actually slamming each other against the mat, and they really were.”

“I learned how not to get hurt, first of all,” said Mirza. “People look at wrestlers and think that what they do is fake. One of the biggest things I learned while making this film was that it’s not fake, it’s all about selling what you do. There’s no winning and there’s no losing. It’s all an art form, it’s like a dance. Being in the ring was so far outside of my own experience, and I loved it. I never had to take the really hard falls, thanks to our amazing stunt doubles, but I sold it. That’s the thing. You’ve just gotta sell what you’re doing constantly.”

Conflict arises when Zaynab refuses to tell her mother about her favored sport or her relationship with Alma. There’s a very funny running gag involving Parveen’s beloved soap opera, which has a penchant for articulating the unspoken feelings simmering between her and Zaynab. My favorite moment in the film occurs when Mirza’s character explains the reasons behind her tireless familial devotion. Her line, “I am my mother’s person,” speaks volumes.

“Being from South Asian culture, the idea of putting your parent in a home when they’re older is not an option,” said Mirza. “You must figure out how you and your parent are going to live together, in the same place, forever. Parveen is a Muslim woman who’s lonely and sad. She has nobody except for her daughter, who is never going to abandon her. Zaynab is going to help her and be there for her, regardless of what that entails.”

“Alma and her mother are very open with each other,” said Reeder. “They share everything verbally and have a very clear line of communication, whereas Zaynab and Parveen communicate in a different way. They may actually be every bit as open with each other, just not in a verbal sense. They don’t talk about their personal lives. Parveen has not spoken to Zaynab about grieving the death of her husband, or discussed who she was as a younger woman in Pakistan. Zaynab doesn’t tell her mother about who she likes to hang out with at night. And yet, despite the absence of a big coming out monologue, we somehow understand that they are communicating with one another. That’s a very common situation among children of immigrant parents, particularly those who came to the U.S. from more conservative cultures. They often hold onto that culture, and sometimes become even more conservative as a result. It’s important that there’s love and communication between the parent and the child, but it comes out in a very different way than we’re used to seeing, at least onscreen.”

“Signature Move” screens at Chicago’s Music Box Theatre on Tuesday, October 3rd, as part of the Midwest Independent Film Festival, with cast and crew in attendance. Festivities kick off at 6pm. For tickets, click here.