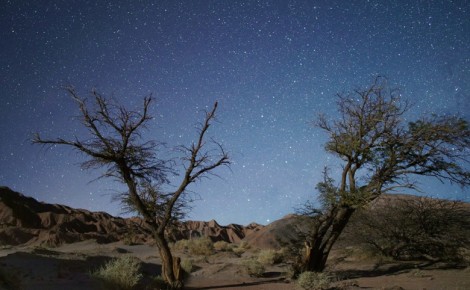 Alison McAlpine’s documentary “Cielo” is the sort of meditative tone poem guaranteed to evoke moments in life that altered your perception of existence. That first ride on a plane where your eyes remained glued to the window, humbled by the smallness of every passing city. That night your uncle woke you up so that you could view the Aurora Borealis through his telescope. That magical summer when you lied on your great uncle’s driveway in Lowpoint, Illinois, to watch the Perseid meteor shower and saw a piece of space junk flare up so brightly, it appeared to rip a hole through the sky. These memories become all the more valuable when living in a place like Chicago, where the mysteries of the heavens are blotted out every night by a canopy of electricity. The reassuring glow of our streetlights and skyscrapers make us feel taller than we actually are, as our attention grows fixed on distractions of increasingly infinitesimal size. If you were depressed by the recent New Yorker cover showing a kid staring at his iPhone at home while displaying no interest in the nearby television—let alone the window—then “Cielo” is the movie for you.

In terms of sheer visual majesty, McAlpine’s film ranks alongside Warwick Thornton’s Australian western “Sweet Country” as one of the year’s great achievements in cinematography. Whereas Thornton’s picture, co-lensed with Dylan River, depicts human brutality set against breathtakingly beautiful (and naggingly indifferent) landscapes, “Cielo” juxtaposes staggering nighttime vistas with intimate vignettes centering on the people who live in northern Chile’s Atacama Desert. As photographed by ace DP Benjamín Echazarreta (“A Fantastic Woman”), the skies hovering above this desert terrain—the driest in the world—seem fraught with life, containing secrets that would be impossible for any human mind to comprehend. Some people may be driven mad by the very concept of infinite space, yet I find the undefinable nature of the cosmos to be comforting. Since the dawn of time, prejudice and bloodshed have been propelled by those mortal beings who delude themselves and their followers into thinking they have all the answers. This grand fallacy provides each belief system with a sense of superiority that swiftly crumbles as soon as one’s gaze is cleared of all blind spots.

I was reminded of that immortal parable about the blind men and the elephant as McAlpine spoke with her subjects, each of whom had a different interpretation of what existed beyond the hemisphere. A young man recounts his encounters with an angelic apparition who followed him through his childhood, while an elder shares his alleged photographs of UFOs. Contrasted with their romanticism is an astronomer who takes a rational, “earth-centered” approach to her research, yet when she looks up at the sky, her expression of awe is as youthful as that of any other interviewee. Most memorable of all are the words of a man who sees his daughter when he looks at the star that she claimed as her own prior to her death. That idea of a night sky being representative of our own past is fitting, since the light of stars remain visible to us long after their source has expired. Whenever I felt homesick as a kid, I’d locate a familiar constellation, and the world would instantly seem far less alienating.

Stanley Kubrick’s half-century-old masterpiece, “2001: A Space Odyssey,” remains the only film I’ve seen that comes close to capturing the awesomeness of outer space in all its ambiguity and grandeur. McAlpine’s team of effects wizards took inspiration from the practical techniques utilized by Douglas Trumbull not only in Kubrick’s sci-fi opus but Terrence Malick’s “The Tree of Life,” which brilliantly paralleled the growth of a single human life with the evolution of the planet. There are times in “Cielo” where I was unsure of precisely what I was looking at, as the film illustrates scientific concepts by resorting to abstract imagery that would fit seamlessly into “2001”’s climactic trip. Our perception is repeatedly subverted as the camera pulls back on rock art that—when viewed close up—looks like it’s etched onto the wall of a cave. Only from a wide angle do the ancient figures reveal themselves to be enormous geoglyphs sprawled onto mountains. Throughout the picture, the earth appears more and more alien until we feel as if we are discovering the planet for the first time. Though McAlpine is more interested in raising questions than making provocative observations, her film nevertheless serves as a welcome dose of spiritual awareness. No matter what your beliefs may be, the space above connects us in a way that transcends all petty divisions. Take a moment tonight to go outside and bask in its wonderment. And leave your phone at home.

“Cielo” is now playing through Tuesday, August 21st, at Film Forum in New York City, and will soon open in various cities across the country. For more info, visit the film’s official site.