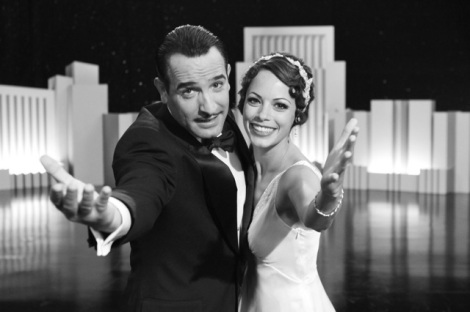 Jean Dujardin and Berenice Bejo star in Michel Hazanavicius’ “The Artist.” Courtesy of The Weinstein Company.

Quentin Tarantino was once quoted saying that no filmmaker should use a song that has already been powerfully featured in a previous picture. The irony is that Tarantino recycles iconic tunes all the time. Not only is the title of his 2009 film, “Inglourious Basterds,” borrowed from a 1978 Italian war film, but its opening theme is the Oscar-nominated “Green Leaves of Summer” from John Wayne’s 1960 epic, “The Alamo.” This isn’t a lazy or uninspired choice as long as the filmmaker finds new and innovative ways to revitalize a composition that deserves to be heard more than once (needless to say, QT is a master at this). Here are eight examples of movie music that have been brilliantly reused, thus proving that great art is indeed ageless.

“Singin’ in the Rain”

The titular tune in Gene Kelly and Stanley Donen’s jubilant 1952 crowd-pleaser accentuates its message that no situation (even the transition from silents to talkies) is too challenging when accompanied by song and dance routines. Kelly’s choreographed splash through the puddles is so exhilaratingly joyous that it’s little wonder why he was appalled when the number turned up over the end credits of a startlingly different picture, Stanley Kubrick’s 1971 controversial classic, “A Clockwork Orange.” Kubrick’s preference for darkly ironic music (so memorably demonstrated in “Dr. Strangelove”) inspired him to have the film’s anti-hero, Alex (Malcolm McDowell), sing the beloved number while taking part in a brutal assault (though according to some reports, the song choice resulted from an improvisation by McDowell). When Kelly’s voice pops up over the end titles, it implies that Alex’s warped psyche is far from cured. It’s an unforgettable juxtaposition that makes Kelly’s whimsy sound troublingly eerie.

Speaking of unhappy stars, actress Kim Novak was so angry about composer Bernard Herrmann’s masterful composition from her 1958 classic, “Vertigo,” being reused in Michel Hazanavicius’ 2011 silent picture, “The Artist,” that she unwisely likened it to a “rape.” Of course, Herrmann’s “Scene d’Amour” will always be remembered first and foremost as the melodic centerpiece of Alfred Hitchcock’s most personal masterwork, conveying the overwhelming beauty of illusion as well as its tragic repercussions. Though the extraordinary track undoubtedly helped “Artist” composer Ludovic Bource snag the Oscar for his otherwise original score, the usage of Herrmann’s work is emblematic of Hazanavicius’ reverence and admiration for classic Hollywood filmmaking. Herrmann’s music is so expressive that it renders dialogue redundant, and it’s thrilling to see a filmmaker forge his own interpretation by marrying the familiar notes with new images. Whether it’s used in the dreamlike and hypnotic “Vertigo” or the rivetingly suspenseful climax of “The Artist,” “Scene d’Amour” is as haunting as ever.

A ket to understanding the work of Wes Anderson is understanding his influences. It wasn’t until his stop-motion gem, “Fantastic Mr. Fox,” that I realized just how deeply the director was impacted by Charles Schulz’s Peanuts cartoons, particularly Bill Melendez’s 1965 classic, “A Charlie Brown Christmas.” With its young heros displaying the vocabulary of adults and the mentality of children, Anderson’s “Moonrise Kingdom” is the finest evocation of Schulz’s humor in several decades. Yet devotees of Anderson will know that the influence of those Peanuts cartoons, with their gloriously melancholic score by the great Vince Guaraldi, has been present in his work from the very beginning. Anderson included snippets of Guaraldi’s music in his 1994 short version of “Bottle Rocket,” though his most memorable usage of the Charlie Brown score is in his hilarious 2001 feature, “The Royal Tenenbaums.” As Gwyneth Paltrow breaks up with Bill Murray, the instrumental version of Guaraldi’s immortal “Christmas Time is Here” sardonically materializes on the soundtrack.

Since the legendary composer Ennio Morricone is still alive and still composing new music for projects including an upcoming remake of “The Canterville Ghost,” it’s curious that his filmography (which IMDb totals at well over 500) doesn’t include a single film by Quentin Tarantino. Perhaps the director is so in love with Morricone’s previous work that he has no need for fresh compositions. Since the vast majority American moviegoers are unfamiliar with the Italian westerns that excited Tarantino as a child, their music might as well function as original scores. Morricone’s rousing composition, “L’Arena,” from Sergio Corbucci’s 1968 western, “Il mercenario” (a.k.a. “A Professional Gun”), brought stunning emotional gravity to the sequence that functions as the emotional centerpiece of Tarantino’s 2004 effort, “Kill Bill: Vol 2,” as The Bride (Uma Thurman) punches her way out of a buried coffin while utilizing the skills she learned from her mentor, Pai Mei (Chia Hui Liu). This is the song that made me an official fan of Morricone, so it’s especially fascinating for me to view its original use in the scene below, which features Franco Nero and Jack Palance in a nail-biting standoff.

This piece co-authored by Carl Orff and Gunlid Keetman is known by a variety of long-winded names, including “Gassenhauer nach Hans Neusiedler (1536)” and “4 Stücke Für Xylophon: Musik Für Kinder III, No. 15: Gassenhauer Nach Hans Neusiedler Für Sopran-, Altxilophon, Castagnetten, Trommel, Schellentrommel Und Pauken.” It has been used in several films, yet its first two usages are the most striking. Terrence Malick’s 1973 masterpiece, “Badlands,” opened and ended with this composition, which hauntingly conveys the childlike psyches of its two young, deranged lovers (Martin Sheen and Sissy Spacek). Two decades later, composer Hans Zimmer reworked the music into his score for Tony Scott’s 1993 thriller, “True Romance,” which was also about two homicidal lovers on the run (played by Christian Slater and Patricia Arquette). Whereas Sheen’s character modeled himself after James Dean, Slater idolizes Elvis Presley (and is frequently followed by his ghost). This is perhaps one of the most direct homages on this list, yet in some ways, Scott and Zimmer’s use of the melody is even more unnerving. Though both films juxtapose the gentle music with jarring bloodshed, Malick’s picture is decidedly unromanticized, while the “happy” ending of Scott’s film is so fantastical that it makes the preceding violence even more disturbing.

Paul Thomas Anderson’s love of Robert Altman was never clearer than when he used Harry Nilsson’s marvelously offbeat number, “He Needs Me,” from Altman’s 1980 musical, “Popeye,” in his equally offbeat 2002 romantic comedy, “Punch-Drunk Love.” The song fit like a glove, as it underlines the inexplicable yet unmistakable attraction between its two oddball leads (played by Adam Sandler and Emily Watson). The song itself was the highlight of Altman’s picture, since it provided an unforgettable showcase for Shelley Duvall in the role of her career (as the sailor’s adoring love interest, Olive Oil). Her string bean physicality and airy voice truly caused her to resemble a cartoon come to life. Nilsson’s rambling lyrics weren’t everyone’s cup of tea, but they functioned perfectly as the melodic equivalent to Altman’s signature orchestration of overlapping dialogue. There’s a spontaneity to Duvall’s performance that makes it seem as if she’s coming up with Nilssen’s lyrics on the spot. It’s a quirky tour de force.

The music of Philip Glass has always had a cyclical quality, as if mirroring the great unseen gears that keep our universe intact. His mesmerizing second anthem for Godfrey Reggio’s “Powaqqatsi,” the 1988 sequel to Reggio’s equally experimental 1982 gem, “Koyaanisqatsi,” suggested a world in an enormous state of transition. The film’s subtitle, “Life in Transformation,” was illustrated by the picture’s abstract array of footage chronicling the industrialization of third world countries. A decade later, Glass allowed his anthem to be used in Peter Weir’s excellent 1998 satire, “The Truman Show,” during the pivotal moment when its titular protagonist (Jim Carrey) starts coming to the horrifying realization that his entire world is an artificial construct controlled by television executives. In an unforgettable sequence, Truman starts veering off the path of his daily routine, while scrutinizing his surroundings with newfound suspicion. At one point, he enters a revolving door and refuses to exit–spinning around and around as the gears in his head spiral faster than ever before. It’s not only an impeccable visualization of Glass’s compulsively repetitive score, but a fitting metaphor for the contrived society that has entrapped Truman from the day he began forming in the womb.

This stirring song composed by Charles Dumont (with lyrics by Michel Vaucaire) was immortalized by singer Édith Piaf when she dedicated her 1960 recording of it to the French Foreign Legion. Translated as, “No, I don’t regret anything,” the song was featured prominently in Olivier Dahan’s 2007 biopic, “La Vie en rose,” which starred Marion Cotillard in an astonishingly authentic, Oscar-winning performance as Piaf. The film memorably ends with Piaf passionately belting out “Non, Je ne regrette rien” like Streisand’s climactic torch number in “Funny Girl.” A mere few years later, Christopher Nolan used excerpts of the Piaf song in his 2010 thriller, “Inception,” as the signal warning dream-intruding agents that they’re about to wake up. The fact that the film co-stars Cotillard as a deceased woman haunting the dreams of an agent (Leonardo DiCaprio) is absolutely fitting, since so much of the film takes place in a dreamscape influenced by the iconography and touchstones of popular culture, particularly James Bond films. What a wonderful addition to an already splendid picture.