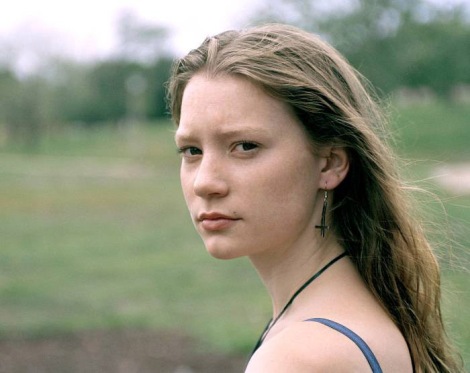 What makes a performer magnetic? What rarefied talent must a person possess in order to draw an audience into their inner world? Whatever it is, Mia Wasikowska has it. Boy does she ever. Every time she materializes onscreen, I can’t pull my eyes away from her mesmerizing face. She can appear youthful and mature, vulnerable and indomitable, innocent and mischievous all within the same take. There’s a refreshing spontaneity to her performances that may have resulted from her lack of formal training. After quitting ballet as a young teen, the Aussie prodigy called up a slew of talent agencies and landed her first role in 2004 on the soap, “All Saints.” Nine years later, she’s appearing in the new Jim Jarmusch film while tackling the lead role in Sophie Barthes’s adaptation of “Madame Bovary.”

Though she’s best known to mainstream audiences for starring in Tim Burton’s visually eye-popping yet dramatically flat “Alice in Wonderland,” Wasikowska (pronounced vash-ih-KOV-ska) has displayed a remarkable versatility in several smaller pictures. She sported a flawless Southern accent in Scott Teems’s gothic drama, “That Evening Sun,” and deftly avoided caricaturizing her terminally ill heroine in Gus Van Sant’s “Restless.” In this latest edition of “Indie Essentials,” we’ll be looking at the five roles that made me a massive fan of Ms. Wasikowska, including one enticing title that arrives in theaters on Friday.

Watching Rodrigo Garcia’s American version of the Israeli TV series, “BeTipul,” is akin to watching two top-drawer actors perform in the most intimate of theatre venues. Gabriel Byrne delivered the greatest performance of his career in the three seasons of HBO’s acclaimed program, impeccably embodying the role of Paul Weston, a psychiatrist who sees various patients throughout the week before going to see his own psychiatrist on Friday (HBO originally broadcast half-hour sessions Monday through Friday in order to recreate Paul’s weekly schedule). The show introduced me to many extraordinary actors (including “Chronicle” star Dane DeHaan), but it was Wasikowska’s turn as Sophie, a suicidal gymnast, that provided Season One with its most powerful and ultimately satisfying plot thread. Sophie’s climatic confrontation with her distant father was a gut-wrenching tour de force.

Lisa Cholodenko’s dramedy about a lesbian couple (wonderfully played by Annette Bening and Julianne Moore) who have children via artificial insemination would’ve been a far more interesting film if it hadn’t succumbed to the formulaic twist of adultery. These characters are too interesting to be limited by contrived plotting, though the actors still manage to make their scenes ring true. As the couple’s daughter, Joni, Wasikowska beautifully portrays the awkwardness of adolescence and the bittersweet exhilaration of early adulthood. She shares a first kiss with a guy that’s so authentically amateurish, it’s almost painful to watch. Yet it’s Joni’s deep-seated desire to meet her sperm donor father (Mark Ruffalo) before her big move to college that drives the plot forward, resulting in this classic exchange over the phone…

Romances have become so dumbed down by Hollywood that it’s almost shocking see a new picture attempt to breathe life into a formidably eloquent literary classic. Screenwriter Moira Buffini remains true to both the sophistication and spirit of Charlotte Brontë’s 1847 novel in this wondrous screen adaptation from “Sin Nombre” director Cary Fukunaga. His decision to cast an 18-year-old as Eyre (her actual age in the book) raised a few eyebrows, particularly when he cast the towering Michael Fassbender as her would-be lover, Mr. Rochester. Though she is indeed 12 years younger than her screen partner, Wasikowska radiates poise and robust strength, evoking memories of Olivia Hussey in Franco Zeffirelli’s “Romeo and Juliet” and Abbie Cornish in Jane Campion’s “Bright Star.” Many women would merely melt in Fassbender’s blue-eyed gaze, but not Mia…

Speaking of unusual screen pairings, let’s take a look at this deeply flawed yet compulsively watchable period drama about women who posed as men in order to find work in 19th century Dublin. The picture reunited Wasikowska with her frequent “In Treatment” director, Rodrigo Garcia, allowing the actress to don another formidable accent with seemingly effortless flair. She’s utterly charming as Helen, a maid who befriends the titular butler portrayed by Glenn Close, who looks so eerily alien that she doesn’t appear to be male or female—but a wholly new asexual gender. It’s difficult to know what to make of the scenes where Albert attempts to court Helen with the desire to make a better life for him/herself. Close and Wasikowska are not exactly a match made in cinematic heaven, but it’s fascinating to watch them together onscreen as they forge their own unconventional brand of chemistry.

Opening March 1st at Chicago’s Landmark Century Centre Cinema is the deliciously perverse English-language debut of South Korean filmmaker Park Chan-wook, best known for his “Vengeance Trilogy” that included 2003’s galvanizing “Oldboy.” Here, he puts his own spin on the sinuous, slow-burn suspense of Alfred Hitchcock by crafting a ghoulishly dark coming-of-age tale. Wasikowska is flat-out brilliant as India, a brooding teen whose grief over her father’s sudden death is eclipsed by her budding curiosity prompted by the unexpected appearance of her “Uncle Charlie” (Matthew Goode), a name lifted directly from Hitchcock’s 1943 gem, “Shadow of a Doubt.” This homage serves as both a clue and a red herring. Though the hyper-stylized aesthetics verge on self-parody, Park masterfully entangles the carnal and diabolical shades of his protagonist’s mounting obsession. There’s a startlingly sensual piano duet, a steamy shower scene and some indelibly chilling flashbacks guaranteed to make one’s spine tingle. Yet my single favorite image in the entire film is Wasikowska’s face as it props up a half-hearted grin only to let it crumble into an ice-cold grimace. Here’s a typical example of Park’s peerless direction captured in a single take…