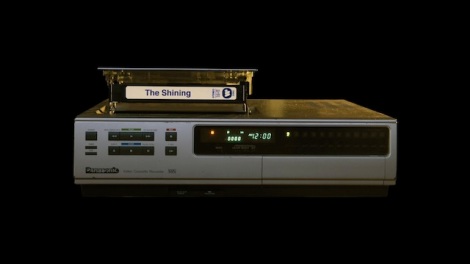 There’s no question Stanley Kubrick’s “The Shining” was one of the seminal moviegoing experiences of my life. I saw it at a young age with my beloved Uncle Chuck in his isolated house atop a hill in Lowpoint, Illinois. The room where we watched it was adorned with Native American artifacts and buffalo heads. I didn’t just feel like I was watching the Overlook Hotel, I felt like I was INSIDE it.

Though I bought the film on VHS, I sold it for a dollar at a garage sale because I didn’t want its terrifying presence in my house. In the years that followed, I eventually purchased the film on DVD and Blu-ray, and it has ultimately secured a solid spot in my top 5 favorite films of all time. I won’t argue that it’s a better film than “Dr. Strangelove” or “2001: A Space Odyssey,” but it has proven to be Kubrick’s most rewarding masterwork upon subsequent viewings.

That’s why a picture like Rodney Ascher’s “Room 237” makes perfect sense. It assembles five superfans with varied backgrounds—an author (Jay Weidner), professor (Geoffrey Cocks), playwright (Juli Kearns), journalist (Bill Blakemore) and musician (John Fell Ryan)—and has them present their own impassioned interpretations of the film’s hidden meanings. This isn’t in the form of a talking head documentary. There are, in fact, no heads to be seen, aside from those witnessed in Kubrick’s original footage, which accompanies the voices of Ascher’s avid cinephiles.

Critics have embraced this film as a quirky valentine to the power of cinema, while branding most of the interviewees’ theories as downright loopy. That may be true in many cases, but I feel such a critique misses the overarching grandeur of this film, which is primarily a tribute to the overwhelmingly provocative power of Kubrick’s meticulously composed abstractions. Since the director’s aesthetic perfectionism remains unparalleled, it makes complete sense to assume that every detail in the frame has a reason for being there. The question of why these details are included is where the fun begins.

There are horror films with more potent, knee-jerk scares than “The Shining,” but none of them have an atmosphere as brutally unsettling as the one conjured by Kubrick’s team of cinematographer John Alcott, production designer Roy Walker, art director Leslie Tomkins and a soundtrack dominated by the nightmarish atonal majesty of Krzysztof Penderecki. They cast the spell that leaves viewers so hooked that they crave countless return visits.

The most effective theories in Ascher’s film are the ones built on solid facts, such as the fiendishly curious blueprint of the Overlook Hotel. There’s a window in the office where doomed caretaker Jack Torrance (Jack Nicholson) has his interview that couldn’t possibly exist. Though the window provides us with a glimpse outdoors, it’s in a small room situated in the middle of the hotel, secluded entirely from any exterior wall. Is this the first sign that the Overlook is possessed? And just who is that curious man who follows Jack and Mr. Ullman on the tour of the hotel? “Room 237” has a theory for that too. It’s entirely a credit to Ascher’s own gift for crafting mood that his film’s most absurd theory (claiming that “The Shining” contains Kubrick’s confession that he faked the moon landing) is also its most chilling. Why does the carpet shift below Danny at such a crucial moment? And why is he wearing a knit sweater displaying Apollo 11?

Regardless of how one chooses to interpret “The Shining,” it has a thematic subtext beneath its bare-bones plot (guy goes crazy and tries to kill wife and son) that is crystalline. It’s about the troubling things in life that we choose to overlook, about the ghosts that haunt the murkiest corners of our minds. Jack’s wife, Wendy (Shelley Duvall), chooses to dismiss the potential danger of being married to an unstable alcoholic, and ends up paying for it. Her reaction to the horrific apparitions in the Overlook is symbolic of her awakening to the monstrous nature of her husband, and his abuse of their son, Danny (Danny Lloyd). It’s entirely appropriate for the hotel to be housed on top of an “Indian burial ground” and be inhabited by the ghosts of affluent white racists. The building is indeed haunted by the bloodshed and atrocity that built America but is left out of history books. Those most susceptible to the hotel’s demonic spirits are those unwilling to learn from their past missteps. Danny does learn from his father’s missteps, quite literally in the film’s climactic chase, and it proves to be his salvation, leaving the bewildered Jack hopelessly frozen in time.

I was obsessed with “The Shining” long before Ascher’s film was announced, and now that I’ve seen it, I’m hopeful that it will play a role in spreading the magic of Kubrick’s artistry to the masses. It’s one hell of a fascinating maze. I guarantee that it will haunt you forever and ever and ever…

Rodney Ascher will be present via Skype for a post-film Q&A following the Chicago premiere of “Room 237” at the Music Box on Friday, April 5th. For tickets, click here.

Tune in to The Morning AMp on Vocalo radio at 9am that morning to hear me discuss the latest in indie cinema with Molly Adams, Brian Babylon and Reggie Ponder. Among the films we’ll be discussing is Derek Cianfrance’s “The Place Beyond the Pines,” starring Ryan Gosling and Bradley Cooper. To read my interview with Cianfrance, click here.