It’s fitting that the film scheduled to screen for Chicago film critics tomorrow is “To the Wonder,” the latest film from Terrence Malick, a filmmaker that Roger Ebert adored. The title describes the precise place where Ebert went today, leaving the world forever changed, enriched, inspired. Here is the tribute to Roger that I wrote five years ago, when I was Assistant A&E Editor at my college paper, the Columbia Chronicle. 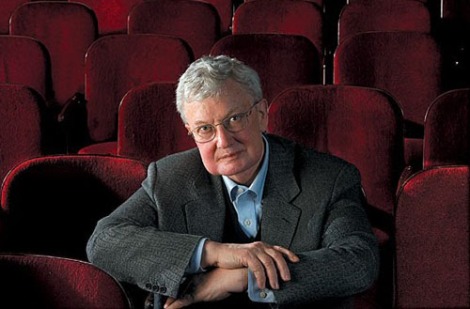 Everyone at Columbia has a hero they look to for artistic inspiration. These could be the deceased artists whose work has influenced generations long before ours. They could also be living legends who can’t go out in public without being followed by 20 burly bodyguards. I consider myself incredibly lucky that my hero is still alive, lives in my town and joins me at a screening room on Lake Street each week.

I think I was about 10 years old when I first began reading the film reviews of Roger Ebert. I used to laugh at his on-camera altercations with fellow critic Gene Siskel, amazed at their furious passion for the art form. Yet as my own passion for films and writing grew, so did my love of Ebert’s work.

His reviews didn’t simply label a film as good or bad. They were works of art unto themselves, brimming with poetry, wit and philosophy. “If the universe is indifferent,” Ebert wrote in his review of Thirteen Conversations About One Thing, “what a consolation that we are not.” His writing was just as thought-provoking as the films themselves. But most importantly, it was Ebert’s pure love of film that made his work so infectious. His belief in the power of cinema inspires filmmakers to reach that potential.

Since attending Columbia, I’ve seen Ebert four times. The first occurred when I was a freshman at the Chicago International Film Festival. I still remember how Ebert appeared in silhouette at the top of the theater’s stairs. It all seemed like a surreal dream.

Next was the Chicago Film Critics’ event honoring Robert Altman. My boldness was so heightened at the event that I succeeded in talking to both Altman and Ebert. I wasn’t sure what to say when I approached the legendary film critic. I shook his hand, and told him I was studying film at Columbia. “Oh yeah, I used to teach there,” he recalled, before getting swept up in the crowd of critics.

I had a more memorable exchange with him at a Borders book signing, where he played off the crowd like a seasoned stand-up comedian. I overheard Ebert expressing frustration at spelling out each of the reader’s names, so when it was my turn to get my book signed, I told him, “I don’t need you to write my name. All I need is a thumb.” And Ebert obliged, drawing a hand giving his trademark “thumb’s up” symbol. The hand looked more like a mutilated bird’s wing than anything, so Ebert helpfully labeled it “Thumb.”

When Ebert was hospitalized to undergo surgery, I felt as if film criticism itself had been put on life support. After acquiring a job at The Chronicle, I had the fortune of attending advance screenings of films at the Lake Street screening room, where practically all of the town’s critics were in attendance. When I sat in the far left chair in the back row, Chicago Tribune critic Mark Caro informed me that I was sitting in Ebert’s chair. I decided I would keep his chair warm for him until he returned.

Ebert proved to be an inspiration even while off the job. When he was well enough to attend public events, Ebert showed no hesitation in allowing people to see him as he was. Cancer had made him unable to speak. He wrote an article about how people shouldn’t be afraid of showing their illness, and his self-confidence was profoundly moving. When he started writing reviews again this year, his mind proved to be as sharp and brilliant as ever. Yet recently, Ebert had also noted sadness about the fact that people don’t know what to say to him, now that he’s been forced into silence.

It was a mere couple of weeks ago when I returned to the screening room for the first time this semester. My breath caught in my throat as I saw Ebert once again sitting in his chair. Not wanting to block his view, I sat in the row in front of him, in the chair just to the right of his. Then something extraordinary happened. Small, rhythmic taps occurred on the back of my chair. I turned to see Ebert staring at me, tapping on my chair, and pointing to the chair in front of him, as if he could read my mind. His head nodded, and I smiled, thus moving into the chair while uttering “Thank you.”

Ebert was sitting silently by himself, as other critics gabbed loudly to each other. Without hesitation, I turned around and “talked” to Ebert … about the Toronto Film Festival, about the films he liked and didn’t like. All the while, his eyes brightened, and he enthusiastically communicated through the use of hand gestures and facial expressions. He seemed pleased to be “talking” again. When the screening ended, I turned back to him and said, “It’s great seeing you back in the screening room, Mr. Ebert.” He simply smiled back and propped up his infamous thumb.

Thank you, Roger, for your generosity, your courage and your undying love of film.

I imagine Ebert and Siskel are resuming their banter at this very moment. Somewhere, a legion of angels are laughing while giving the reunited duo a hearty thumbs up.