Cinephiles in Chicago are in for a mightily enticing feast as the 25th Onion City Experimental Film and Video Festival comes to a close this weekend. A special sneak preview of the hugely anticipated documentary, “Double Play,” is scheduled to be the festival’s closing night selection. It marks the directorial debut of Gabe Klinger, an accomplished and exceptionally insightful critic, teacher and curator who I was lucky enough to encounter at Columbia College. His film explores the longtime friendship between two visionary filmmakers, avant-garde icon James Benning (“One Way Boogie Woogie,” “Nightfall”) and Oscar-nominated art house darling Richard Linklater (“Dazed and Confused,” “Before Midnight”), as they play ball and stroll through old shooting locations over the course of a few, conversation-filled days.

Indie Outlook spoke with Klinger about his first feature filmmaking experience, his thoughts regarding Benning’s under-seen work and the technique he learned from Jacques Rivette.

Q: What attracts you to the art of documentary filmmaking?

A: Well, I’m attracted to cinema, first and foremost. Documentary either works or it doesn’t for the kind of story and ideas you want to [explore]. Of course, there is a practice and now even an industry built around the genre of documentary, but I don’t necessarily see our film following in that lineage. Most documentaries nowadays shoot 200 to 400 hours and follow their subject for years. The way I conceptualized my film [allowed us to] shoot it almost like a standard narrative with staged scenes and shots that had spontaneous things happening within them. We shot less than 20 hours over three or four days, which was pretty rough on our crew (we worked about 16 hours for all of those days). But the result was very intense, and once James and Rick got going, you could feel that they just wanted to keep going. Of course, I only followed them around for four days, but then I’ve been internalizing all of this knowledge about them and their films for years, so I feel like it works.

Q: What was your familiarity with James Benning’s work prior to filming?

A: I had seen quite a good number of Benning’s films, mostly in cinemas in 16mm and recently digitally. He doesn’t really permit showing his work in the home video format, though recently, the Austrian Filmmuseum has been putting out lovely editions of his work on DVD. Still, there’s something lost, and I always prefer to seek out his films in the theater. Last year, I drove to Milwaukee to see “Nightfall,” which James was showing at UWM. He gave me all of his films on a hard drive, but it’s just not the same to watch them that way. I love his way of interacting with the audience; he’s very calm and lucid. It really lends a lot to the whole experience. I suppose it was from seeing him interact with audiences and students that the initial idea came about to document him in some way.

Benning’s films have certainly influenced me but I wouldn’t call them documentaries. The word “structural” has been attributed to them, and landscape film, and essay film, and experimental…. all of that. He might film real things but then he renders them in a very special way that could never be described as conventional vérité. His films are one of a kind. Linklater calls him “one of today’s great visual artists” and I agree. There’s a part of him that’s more interested in visual art than cinema, except he doesn’t really like galleries, so he prefers to make work for movie theaters.

Q: How did you come to the realization that this friendship could sustain a feature?

A: This was never a realization! So the project was a big risk. I had no idea if it would work. Fortunately, as we discovered probably by the end of the first day’s shoot that there was enough to sustain a (short) feature.

Q: It appears that the film consists largely of conversations between the two men. What was the challenge in making these conversations cinematic? I know Linklater is especially skilled in achieving this.

A: Yes, exactly! Linklater was a big reference for this. For the scene where Benning and Linklater climb to the top of Mount Bonnell, where Linklater had filmed “Slacker” more than twenty years earlier, the model was obviously the “Before” trilogy. In all three films, there are various scenes that have Celine and Jessie walking along somewhere in an unbroken tracking shot. Our shots weren’t as smooth, but we managed to get some good material.

But, you know, it’s not really a challenge to film lively conversation. You just kind of have to put the camera there. That’s what Jacques Rivette taught me with his documentary on Jean Renoir. The conversation is good, why mess around too much with the camera? Keep it at eye level and that’s that. That was my original concept, anyway. In the end, our film doesn’t do a lot of that. I would have preferred a simpler shooting style more but our DP, Eduard Grau, had some different visual concepts, so I just went with them. Our camera moves a lot and I suppose this makes it more interesting. Who knows? For me, the film really came alive in the editing more than anything else, when I was able to incorporate lots of archive material.

Q: It’s refreshing to see a film that draws connections between two obsessions that are typically put at odds with one another: sports and art. How, if at all, did this film expand your own understanding of the relation between the two?

A: I was a baseball player when I was younger, so that was definitely a connection I had with them. And I’m always interested in unlikely connections between things that at the surface seem very different. When you’re in school, there’s always this idea that sports exist on one side and art and art-making exist on this complete other side, and that they can never mingle… It’s funny how people discover cinema because of injuries or illness. Scorsese had asthma, Joe Dante—who I just wrote a book about—had polio when he was a kid, and Linklater had a heart rhythm problem. They all wound up cinephiles. It’s fun, though, to think about sports and art as an obsession. Every artist or filmmaker knows that to really make something, you have to be obsessive. I certainly learned that making this film. It’s the same in sports, when you want to reach a certain goal or better yourself physically.

Q: Tell me about your collaboration with Eduard Grau, whose work I loved in “A Single Man.” How did he become involved in the project?

A: I met Eduard several times over the years and was trying to keep aware of his work, which always impressed me. His cinematography on Albert Serra’s  “Quixotic/Honor de Cavelleria” (2006) is absolutely amazing. I’m less fond of the more polished commercial stuff he’s doing now, but whenever I see him, he always talks about really original uses for cameras and such. He has a real vision, and I wanted to get a guy who would help me to make my film not look like a documentary. That was our approach basically… how to make this as cinematic as possible, given that our two subjects are extremely concerned with how their films look.

Q: How close was your collaboration with Danielle Anezin in the editing room?

A: Danielle was a consultant, and an important one because she has edited a lot of films in the “Cinéma, de notre temps” series. She was going to help with the editing itself, but I was too anxious and ended up doing it mostly on my own, usually very late at night. Danielle would come in once or twice a week and tell me if what I was doing was going in a good direction or not. You need someone like that, as well as your close friends, in order [to prevent] editing from becoming too subjective.

Q: As a first-time feature director, what was the most challenging and most rewarding aspect of this experience for you?

A: For me, it’s about film history, which is why I’m really glad that we’re in the film history section of the Venice Film Festival. I mean, wouldn’t you want to be in the same section with restored films by John Ford, Chantal Akerman, Satyajit Ray, etc etc? I used the experience to gain a more profound outlook on Benning’s and Linklater’s films, to gain an aesthetic and historic sense of them, so that was the most rewarding part.

As far as making a film for the first time, yeah, it was a challenge. I still don’t know how I pulled it off. I learned all the important practical things so that if I ever want to make another film, it will hopefully be a bit easier—or it will be easier in certain respects and I can use the energy I save towards other, more challenging goals. I don’t know what one thing was more specifically challenging than others. Maybe just working up the courage to direct Benning and Linklater.

Q: What are your thoughts regarding the Onion City Film Festival, and why did you decide to have your film screen there?

A: It’s just an “advance preview”, strictly a one-off thing. We’re not even giving press screeners and there’s an embargo on reviews. The idea of the showing was that, well, I have friends and family and supporters in Chicago, so it was a way to offer them a glimpse at the film before it went off to the bigger showcases. Usually it can take several months or even a year for a film like this to screen in Chicago. I was one of those people always eagerly awaiting the big films from Cannes and Venice to come around to Chicago. I couldn’t wait. “Double Play” isn’t exactly one of those big films, but it is a film that a lot of people seem to be looking forward to, and I wanted audiences in Chicago to get the treat of seeing it before almost anyone else. And Patrick Friel, who programs the festival, is an old friend and he showed me my first Warhol and Brakhage films, so I owe him a lot.

Q: What’s next for you? Are you interested in making narrative features as well as documentaries?

A: I’m definitely interested in all kinds of filmmaking but financing films nowadays is extremely tough. Last night here in Venice, I was talking to the producer Simon Field, who works very closely with Apichatpong Weerasethakul, and he told me that it’s been an uphill battle raising money for Weerasethakul’s next feature—and this is for a project by a filmmaker whose last film won the top award in Cannes! You’d think it was easy, but markets and funds are drying up and people are scrambling. Awards and critical acclaim are nice but investors are always looking at how the film performed in theaters and across other platforms. Even if a film was bought for 40 territories, like “Uncle Boonmee” was, it’s still not a guaranteed investment. So I don’t know if I could ever make films at that level. I might just make smaller films, small essay-type films, to put on the internet for free, or, well, write a script for fun and see who bites. But I have no careerist ambitions. I just love movies and if I can keep having access to them and talking to people about them, then that’s enough for me.

Shortly after our interview, Gabe won the Lion for Best Documentary (Classics Section) at the 70th Venice Film Festival. 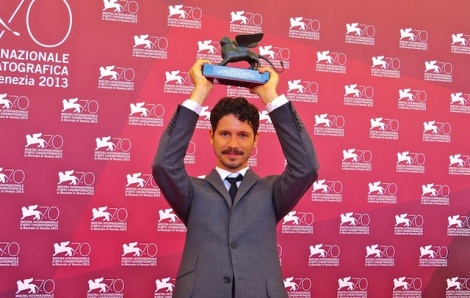