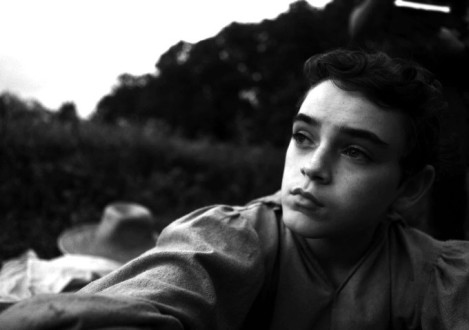 I saw A.J. Edwards’ “The Better Angels” on a double bill with “The Thin Red Line,” Terrence Malick’s 1998 war epic that deserves to be experienced in its full majesty on Blu-ray. The beauty of John Toll’s Steadicam cinematography, gliding through gorgeous hills dotted with soldiers as blood-stained grass blades rustle in the wind, forms a juxtaposition with the horrors of combat in a way that evokes that painterly southern landscapes of “12 Years a Slave.” Though Malick’s film was easily overshadowed upon its initial release by Steven Spielberg’s more visceral if conventional “Saving Private Ryan,” “Thin Red Line” is no less haunting or breathtakingly powerful. There is an unmistakable spiritual philosophy in Malick’s recurring theme, so memorably articulated in the narration—which falls somewhere between an inner monologue and a prayer, that the entirety of mankind shares a single soul, thus making us “all faces of the same man.” Malick illustrates this by allowing the familiar faces of his A-list ensemble to blur into one another, shattering antagonistic barriers between individuals while finding the tragically overlooked connective tissue that unities the family of man.

At his best, Malick is America’s most gifted cinematic poet, and has clearly served as a major influence on countless young filmmakers. Edwards can certainly be included among them, though he is one of the few who has actually collaborated with Malick a number of times prior to his directorial debut. He served as an editorial intern on “The New World,” a key artistic consultant on “The Tree of Life” and was one of five credited editors on “To the Wonder,” a mystifying minor work that stands as the director’s most puzzling film to date. In contrast, the wordless texture of “Better Angels” couldn’t be clearer. The film has been criticized as being a mere rip-off of Malick, as if approximating the tone and style established by one of our greatest living filmmakers was a feat to be dismissed. I will admit, however, that the picture’s similarities to Edwards’ obvious inspiration (who served as a producer on the project) were so conspicuous that they emerged as a glaring distraction during my initial viewing of it. It wasn’t until afterward that I realized just how ingenious a fit Malick’s signature approach was to the subject matter: an impressionistic mood piece about the formative years of Abraham Lincoln.

There are few icons in American history who were as humanistic and poetic as Lincoln, so it feels entirely appropriate for his story to be told with the poetic humanism of Malick. In many ways, Edwards’ film is a tribute to both men, and though the film can’t quite transcend its limitations as a stylistic experiment, it does linger quite vividly in one’s memory. The black-and-white cinematography by Matthew J. Lloyd (“Robot & Frank”) is luminous without diluting the starkness of the characters’ struggle to survive in the Indiana wilderness circa 1817. Newcomer Braydon Denney is a fabulous choice for the role of young Abe, with his soulful eyes exuding the weariness of an absent childhood and the benevolence of a budding emancipator who’s felt the sting of oppression at the hands of his domineering father, Tom (Jason Clarke). Audiences who felt perplexed by Malick’s masterpiece “Tree of Life,” may reach a better understanding of the picture after seeing Edwards’ film, which tells a strikingly analogous story stripped of fractured time lines or jarring abstractions.

“Tree of Life” was about a boy (Hunter McCracken, played as an adult by Sean Penn) who finds himself at the center of an ideological tug of war between his father (Brad Pitt), an embodiment of “nature” in all its primal self-involvement, and his mother (Jessica Chastain), a caregiver fueled by the tireless force of “grace” as defined in Christian theology. These parents—not to mention the promotion-seeking Lieutenant Colonel (Nick Nolte) and the defiant Captain (Elias Koteas), respectively, in “Thin Red Line”—are mirror images of Lincoln’s father, who treats his son as a laborer with no regard to the boy’s uncommon gifts, and mother, Nancy (Brit Marling), who teaches her son about faith and God before her sudden death in 1818. A year later, Tom married a widow, Sarah (Diane Kruger), and she brought to fruition what Nancy had begun. She loved Abe as if he were her own son and fought for him to receive a good education. If these story threads were presented in the standard biopic fashion, it would take up a few minutes of screen time. Hollywood has pressured filmmakers to move the plot forward to such a degree that audience engagement is routinely ignored, and often the most intriguing bits of character development are left on the cutting room floor. Stories should not be told but felt in cinema, and “Better Angels” does a lovely job of allowing the viewer to feel every precarious step of Lincoln’s evolution as observed through the eyes of his cousin and close companion, Dennis, whose straightforward narration was derived from an actual interview with the real man.

Though they may seem like opposites at first glance, “The Better Angels” would make a wondrous double bill with Spielberg’s “Lincoln,” which focuses on the last days of the president’s life as he makes every conceivable effort to abolish slavery. Both films demonstrate that a meticulously explored vignette of a person’s life tells us so much more about that life than a sprawling SparkNotes summary ever could. And if we are indeed all faces of the same man, then Malick and Edwards’ dichotomic mentors exemplify the conflicting impulses of nature and grace that exist within us all. That’s the story of “The Tree of Life,” and it just happens to be Lincoln’s story too.