Reggie Nalder in Alfred Hitchcock’s “The Man Who Knew Too Much.” Courtesy of Universal Pictures.

“No bags allowed,” said the theater attendant. Initially, I was shocked. I had carried my laptop bag with me to film screenings for the last several years, but today was different. Yet another gunman had stormed into a theater—this time in Tennessee—and was killed before he could take any lives. He was armed with an airsoft pistol, a hatchet, pepper spray…and a bookbag. The attack occurred less than two weeks after a man fatally shot two audience members in a Louisiana theater before killing himself. Amy Schumer, star and writer of “Trainwreck,” the film that happened to be playing that night, gave a moving speech soon afterward advocating the importance of gun control, while standing beside her cousin, Sen. Chuck Schumer.

I had recently spoken with Lucia McBath, the mother of Jordan Davis, an unarmed 17-year-old who was shot to death after a brief verbal altercation in a gas station with a white man more than twice his age. McBath is the subject of two immensely powerful documentaries set for release this year, Marc Silver’s “3 1/2 Minutes, Ten Bullets” and Abigail Disney’s “The Armor of Light,” the latter of which I saw at AFI Docs fest. The day prior to the AFI screening, McBath visited the victims of the church shooting in Charleston. When I brought up the fact that many of these incidents seem to be occurring in communal spaces—particularly churches and movie theaters—McBath said that the shooters are likely looking for attention by choosing “spaces that will attract the greatest numbers of people.” She also noted that for people of faith, “church is the last bastion of safety and love and acceptance,” and that “evil infiltrating the church is like evil infiltrating the heart of God.” The same thing could be said of a movie theater. It’s a place that unites strangers through the emotional journey of a shared experience that, at its best, can be a sacred one.

Alfred Hitchcock’s films thrived on the horror that could be gleaned from set pieces where characters were attacked when they were at their most vulnerable—in the shower, in a field, in a boat, etc. His 1942 film, “Saboteur,” had a sequence where a terrorist (played by screen veteran Norman Lloyd, most recently seen in “Trainwreck”) opened fire in a movie theater at the precise moment when gunshots rang out onscreen, killing unsuspecting members of the audience. My favorite scene in the history of cinema lies at the heart of Hitchcock’s 1956 masterpiece, “The Man Who Knew Too Much,” a superior remake of his own picture from 1934. It involves an assassination attempt at the Royal Albert Hall during a sublimely chilling performance of Arthur Benjamin’s “Storm Cloud Cantata,” arranged to perfection by Bernard Herrmann (who, naturally, appears as the conductor). For me, it’s the ultimate illustration of pure cinema. When I learned that a key segment in Christopher McQuarrie’s “Mission: Impossible—Rogue Nation” paid explicit homage to that amazing scene, I figured I had to check it out. 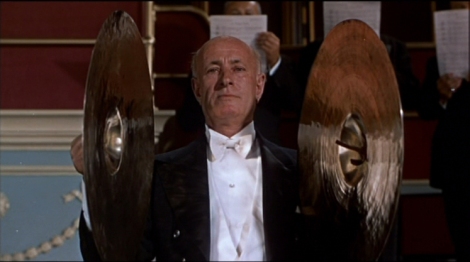 The cymbalist in Alfred Hitchcock’s “The Man Who Knew Too Much.” Courtesy of Universal Pictures.

That was the movie I was attempting to see when I was turned down for carrying a bag. It was the latest in a bizarre string of failed efforts on my part to view the film, which was beginning to seem like an impossible mission in itself (I caught the movie later that night at a different venue). Yet in light of all the innocent lives that had been recently lost in senseless shootings, it felt odd to be seeking an escapist thrill from a scene that depicted, well, a senseless shooting. “Mission: Impossible 5” is perfectly serviceable popcorn entertainment with just enough invention to maintain one’s interest, though its depth is no deeper than that of a standard Bond flick. I don’t care about Ethan Hunt any more than I care about James Bond (they are essentially interchangeable, in my mind), and Tom Cruise has always been more interesting to me as a character actor than as an action hero. His best roles are designed to break down his cocky signature persona, never moreso than in 1989’s “Born on the Fourth of July” (featuring Cruise’s finest performance), which renders one of cinema’s leading sex symbols tragically impotent.

It’s no surprise that the most satisfying scene in McQuarrie’s film is the one that owes more than a passing debt to the Master. It takes place during a performance of “Turandot” at a Vienna opera house, where the Austrian Chancellor is caught in the crosshairs of multiple armed would-be assassins. Hunt must live up to his oh-so-appropriate name by hunting down each one of them before the opera reaches a bombastic note, circled in red by one of the gunmen as the cue to fire. The concept of assassins paging through sheet music in order to ensure their carnage is well-timed—thus muting the noise of their gunfire—is one of many elements taken directly from Hitchcock. What made the scene in “Man Who Knew Too Much” all the more effective was how Hitchcock built up to it, teasing viewers with snippets of the key moment when the fatal shot would occur—signaled by a single crash of cymbals. When the scene finally arrived, the viewer would tense up every time the camera cut to the cymbalist. The musician’s preparation of his instrument mirrored the assassin’s preparation of his gun, and in “Mission 5,” one of the guns literally takes the form of an instrument—a flute, no less. Yet since this is a modern action movie, there are more fights and fatalities to break up the mounting suspense. In “Man Who Knew Too Much,” nothing—not even dialogue (which Hitch wisely threw out)— gets in the way of the tension until it reaches its gloriously excruciating peak.

Most crucial to the success of the sequence is the music itself, which mirrors the turbulence of Doris Day’s riveting performance, as she silently sizes up the situation and finds herself faced with a formidable choice. If she alerts people to the imminent murder brewing in the balconies above her head, then she is putting the life of her kidnapped son in danger (he was taken from her once her husband learned “too much” about the assassination plot). If she remains quiet, she will watch a man die in cold blood—a death she could have prevented. Meanwhile Benjamin’s lyrics for the cantata hauntingly reflect the ensuing drama (caution: spoilers are revealed after the lyrics)…

“There came a whispered terror on the breeze.

And the dark forest shook.

And on the trembling trees came nameless fear.

And panic overtook each flying creature of the wild.

And when they all had fled…

Around whose head was screaming

The night-birds wheeled and shoot away.

Finding release from that which drove them onward like their prey.

And drowned the dying moon.

Doris Day in Alfred Hitchcock’s “The Man Who Knew Too Much.” Courtesy of Universal Pictures.

And find release Day does, screaming during the silence just before the cymbal crash. Her sudden outburst causes the assassin to flinch and miss his target, resulting in a mere flesh wound for the Prime Minister. In “Mission 5,” Hunt finds himself in a similar situation. With two assassins presumably aiming their guns at the Chancellor, he can’t decide which one to take out. So he shoots the Chancellor himself, resulting in a mere flesh wound that knocks him out of the line of fire in the nick of time. It’s a nifty twist on Hitchcock’s climax, and it caused me to laugh in exhilaration just as the original scene does every time I revisit it.

I refuse to be scared away from going to the movie theater. Art forms like cinema are what bring us together as a species, enabling us to view the world from perspectives that are exponentially different from our own. Even escapism can nourish us with hope during times of dire tragedy. Films are part of the answer, not the problem, and you can bet that I’ll be seeing one again soon—with or without my bag.