Ever since I purchased a Blu-ray player that enables me to stream content from Netflix directly onto my TV, I have spent many an evening searching for titles—primarily foreign and nonfiction—that I missed during their initial U.S. release. I’ve always been drawn to the coming-of-age genre, and have often found that films from other countries are infinitely more honest and insightful about teenagers than the typical nostalgia-tinged drama made in America. Two Netflix discoveries I recently stumbled upon centered on the lives of young women. One film is from the country of Georgia, the other is from Canada, and they are, quite simply, two of the best films I’ve seen in ages. In the midst of a cinematic year that has thus far been rather underwhelming, especially in contrast to 2015, these pictures have reminded me of how visual storytelling can transcend the barriers of gender and culture, illustrating universal truths that don’t require words. Not once during either film did I feel the need to check the time or hop on my iPhone to answer a text. I was completely enveloped in the lives of these women, and found myself cheering them on as they defied forces of oppression cloaked in the guise of romance.

2013’s “In Bloom,” co-directed by Nana Ekvtimishvili and Simon Groß, sets its tale in 1992, a year after Georgia received its independence from the Soviet Union. Teenage friends Eka (Lika Babluani) and Natia (Mariam Bokeria) live in their nation’s capital, Tbilisi, and are facing various forms of tension at home. Violence erupts with sudden intensity on the streets, and life inside the girls’ houses is no less volatile. Eka’s father is in jail, while Natia’s father is imprisoned by his own alcoholism. Only when they’re together do these friends find any semblance of peace. When Natia is aggressively pursued by a young man, Kote (Zurab Gogaladze), who refuses to take no for an answer, the red flags start to materialize in Eka’s eyes. When Kote and his friends pull up in their car, grab Natia and zoom away, Eka looks in outrage at the crowd of adults in a nearby breadline. They saw it all and did nothing. I was fully expecting the scene to end there, but Eka isn’t through yet. She charges up to the bystanders, screaming expletives until an old man socks her in the face.

This shocking moment leads to an extended sequence—captured in one take by master cinematographer Oleg Mutu (“4 Months, 3 Weeks and 2 Days”)—that is flat-out exhilarating. With her face freshly bruised, Eka attends the wedding ceremony of Natia, who has chosen to marry Kote against her better instincts. Frightened for her friend yet determined to remain a force of strength in her life, Eka downs an alcoholic beverage before strutting into a cheering circle of partiers, and performing a mesmerizing dance routine that brings down the house and causes Natia to leap into her arms. Though this film remains Babluani’s sole acting credit, I sincerely hope to see her in more pictures. Her character may look diminutive and frail at first glance, but she proves to have all the presence and indestructible spirit of Ripley in “Aliens” or Furiosa in “Mad Max: Fury Road.” She’s not an action hero, just a person who has become fed up with society’s ever-present need to define her, constraining her growth within a virginal ideal of femininity. Watching Babluani’s Eka in full boom is a glorious thing to behold, and left my spirits lifted even in light of all the misery she must face. 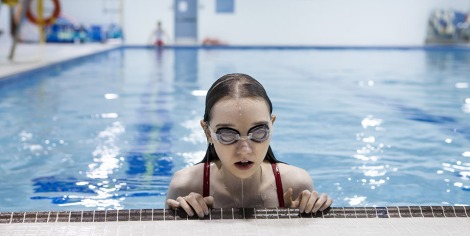 Another performance guaranteed to occupy a permanent place in my memory is delivered by Julia Sarah Stone in writer/director Lindsay MacKay’s sublime feature debut, “Wet Bum” (2014). She plays Sam, a 14-year-old girl at an awkward stage of her adolescence. Her vulnerability and self-consciousness regarding her body has led her to become bullied by former friends. While taking swimming lessons, she refuses to take off her bathing suit in front of her peers, leading to the titular “wet bum” observed by Ed (Kenneth Welsh), an embittered inhabitant of the retirement home run by Sam’s mother. This is the place where Sam has been tasked to work, and MacKay impeccably captures the soul-crushing atmosphere of such establishments. The people who live there are either unaware of their surroundings or are yearning to escape them. After having personally observed the conditions at a rehab center temporarily occupied by my mother, it appears that many of these places are staffed by good people who lack the funding and resources to provide the necessary level of competence. Though Ed is an unlikable character for much of the film, I completely understood why he felt trapped.

Sam feels trapped too—in a job she hates and in a body that brings her embarrassment. Yet she finds acceptance and potential companionship from Lukas (Craig Arnold), her swimming instructor who is about the same age as her older brother. Arnold and MacKay deftly balance each of Lukas’ scenes with just the right amount of sweetness and menace. From the moment he calls out to Sam, asking her to stay after class for one-on-one instruction, there’s a tension reverberating beneath each of their exchanges. Lukas’ demeanor is warm and reassuring, and he sounds genuinely sorry when he believes he has crossed a line. Yet small gestures, such as a crudely raised middle finger or flimsy claims of “I’m kidding,” cause us to second-guess his intentions. It was unclear to me how this story thread would merge with the scenes at the retirement home, and when they finally do, the payoff had me applauding in sheer delight. Sam is, in her own way, as victorious as Eka. She is not a damsel in distress but a woman striving to learn about life on her own terms.

Anchoring the entire picture is the sheer believability of Stone, who strikes not a single false note, and is virtually in every scene. She has the sort of face that draws you in with its expressive nuance, conveying the mixture of excitement and unease she feels within Lukas’ orbit. Some of the film’s loveliest scenes center on the largely wordless friendship Sam strikes up with another elderly retiree, Judith (Diana Leblanc), who is often perched at the window of her room, staring at whomever happens to pass her gaze. Though Sam initially feels awkward cleaning around the woman as she sits silently in her chair, she eventually forges a tender connection with Judith that is established in a single wave. There’s no question “Wet Bum” is the work of a born filmmaker, and I can’t wait to see what MacKay does next. She joins the ranks of modern female filmmakers such as Marielle Heller, Deborah Kampmeier, Valerie Weiss, Joanna Arnow, Sophia Takal, Rebecca Parrish, Kris Swanberg, Patty Jenkins and countless others whose work deserves equal screen time with that of their male peers. I can’t thank Netflix enough for bringing both of these titles to my attention, and can’t wait for more subscribers in America and elsewhere to discover them.

“In Bloom” and “Wet Bum” are currently available for streaming on Netflix Instant.