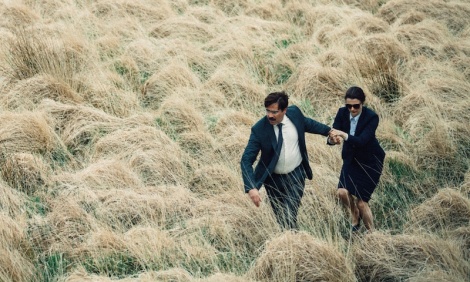 Colin Farrell and Rachel Weisz in Yorgos Lanthimos’ “The Lobster.”

You know those nightmares that you start laughing at the instant you wake up? They are so illogical and silly that you end up snickering once you try describing them to a friend. Yet the emotions that you felt while having the dream were brutally real, and you may find yourself haunted by them the next time your head hits the pillow. “The Lobster,” the latest offering from Greek filmmaker Yorgos Lanthimos, plays like that kind of dream. A mere plot description is guaranteed to elicit giggles, but it doesn’t even begin to convey the film’s galvanizing power. It is funny, no question, but it is also horrific, and anyone who has seen Lanthimos’ 2009 cult favorite, “Dogtooth,” will have a pretty good idea of what’s in store for them here.

“Dogtooth” contains one of my all-time favorite scenes in movie history, and yet I’ve found it difficult to bring myself to revisit the film as a whole. It’s an immensely unsettling piece of surrealistic satire, set within a repressive household run by sadistic parents. Their rigid series of rules for their three teenage children are monstrous in their complete detachment from reality. It’s as if this couple had set out to brainwash their offspring for their own private amusement. The scene that left me weeping tears of laughter and incredulity occurs during an evening upon which the children are instructed to entertain their parents. As the son (Hristos Passalis) plays a brooding melody on his guitar, his sisters (Angeliki Papoulia and Mary Tsoni) perform spastic dance moves that have no relation to the accompanying music. The younger girl eventually asks to sit down, leaving the older sister stranded onstage. She then breaks away from the rehearsed dance, expressing her primal sexual energy and frustration in a frenzied bout of spontaneous choreography. It’s not long before the disgruntled mother pulls the plug on family fun night.

As funny as this scene is, it also resonates as deeply tragic, encapsulating a recurring theme in Lanthimos’ work, which is the absurdity of conformity, of enacting moves that have no connection to one’s own instincts. Rather than unfold within a single location, “The Lobster” expands its view to an entire dystopian society comprised of The City, The Woods and The Hotel. Single people are banished to The Hotel, where they have 45 days to find a mate. Physical similarities are more important than personality traits or chemistry when it comes to choosing a partner, and if the people fail to find their soul mate within the designated time frame, they will be transformed into an animal of their choice. The shunned critters will then have to fend for themselves in The Woods, where they’ll be hunted by a rogue band of single rebels who are equally cruel in their methods of control. It’s hardly surprising when love is found in the most forbidden of places, considering how this society has been designed to snuff out all traces of organic human interaction.

Whereas another recent big screen allegory, Ben Wheatley’s “High-Rise,” sloppily tackled its brilliant ideas while displaying a nasty streak of sadism, “The Lobster” is clearly the work of a skilled filmmaker who actually cares about his characters. These are not wax dummies propped up for our amusement, but achingly real beings whose suffering truly registers within all of the heightened lunacy. Much of the credit must go to the spot-on casting in every role, from Colin Farrell and Rachel Weisz as the star-crossed would-be lovers to an ensemble filled with talent that (unlike in “High-Rise”) are never wasted. Olivia Colman gets the biggest laughs with her Nurse Ratched-esque head of The Hotel, who informs a freshly united couple that if they start to fight, they will be assigned children (“That usually helps,” she notes with deadpan earnestness). John C. Reilly plays a hapless bachelor that might as well be dubbed The John C. Reilly Role, suggesting what might’ve happened to Amos Hart had he developed a lisp. After stealing all of her scenes in “Tamara Drewe” and “Hanna,” Jessica Barden is perfectly cast as a nosebleed-prone motormouth who catches the eye of Ben Whishaw, a man of unfathomable desperation. When he slams his head against a table in order to bloody his nose, thereby maintaining a façade of compatibility with Barden, it is not a slapstick moment. It looks like it really hurts, much like the act of self-mutilation that jarringly follows the uproarious dance sequence in “Dogtooth.”

Most frightening of all is Léa Seydoux as the leader of the single folk, and Lanthimos makes fine use of her indelibly chilly stares. Embodying evil at its most self-righteous, Seydoux destroys two victims without causing them any physical harm. Instead, she removes their sense of trust and loyalty in one another, piercing through their ruptured bond with a destructiveness akin to the avalanche in “Force Majeure.” In order to ensure that none of her tribe members will become romantically entangled, they are required to dance by themselves while listening to music on their headphones. This leads to one of the film’s most tender moments, as Farrell and Weisz secretly synchronize the songs in their headsets, enabling them to dance together. It was during this particular shot that I noticed an animal grazing in the background, and I realized that I knew who it was. It may be a throwaway detail, but it adds to the richness of this fully realized world.

I’m grateful that “The Lobster” is Lanthimos’ first film in English, since it is bound to speak with effortless ease to Americans so divided by their ideologies that they are unable to see the person in front of them. Though it never quite made me howl with laughter like “Dogtooth” did, this picture is an altogether more satisfying and accomplished work, building to a moment that is so squirm-inducing, I found myself barely able to look at the screen. The suspense was so visceral, so drawn-out and so lacking in any conventional closure that I couldn’t help but cackle with glee. This is easily one of the year’s best films, a deeply unpleasant experience that I never wanted to end.

The Lobster opens in Chicago on Friday, May 20th.