Nothing excites me more than discovering an artist whose work is unlike anything I’ve seen before. The third year of Indie Outlook, my labor of love devoted to covering cinema’s independent gems, was chock-full of such experiences. Though my full-time job at The Ebert Company has certainly kept me busy, it motivated me to go even more in-depth with my interviews and essays, while championing films that challenge audiences to view the world in an entirely new light. As I did for my site’s first and second anniversary, I’ve compiled various interview highlights from the past twelve months. Click on the name of the interviewee, and you will be directed to the full article…

“I like writing about movies but I also like making them, and it’s kind of hard to do both. One of them always gets the short-shrift because they are all-consuming jobs. As you know, if you are going to write a review or interview somebody, you’re not just taking two hours to watch their movie. You’re researching the other things they’ve done. To me, the only downside of filmmaking is that it gets in the way of my film viewing. When you’re making a movie, you don’t have that much time to watch anything else. Paul Schrader has this great quote where he says that filmmaking is an act of birth and film criticism is an act of autopsy, and I think that’s very true.”—Jim Hemphill, director of “The Trouble with the Truth”

“I used to be the guy at parties that people would come up to and say, ‘What’s wrong?’ I didn’t know what the hell they were talking about, because inside, I thought I felt fine. It turns out I wasn’t, and I was communicating that with my face. I just wasn’t in touch with my feelings. Once I did, I became comfortable with showing that to people in the movies. Suddenly what I was feeling inside and what I was attempting to convey were reaching people.”—Pat Healy, star of “Henry Gamble’s Birthday Party”

“At one point, I got surrounded by policemen asking what I was doing there. I just started explaining everything. That was one thing I learned from ‘Patang’: don’t just tell them the whole truth, tell them so much truth that they don’t want to hear any more. One of the cops asked, ‘What do you think the Americans will think of this?’ I said, ‘Well, half of them will think that you’re pretty crazy. The other half are going to look at these rituals that you are engaging in and see themselves in a different light. You will open them up to entirely new possibilities. This will be a gift to them.’ Then the cops asked, ‘Where do you want to shoot?’ and allowed me to get up close to the fire.”—Prashant Bhargava, director of “Radhe Radhe: Rites of Holi”

“I wanted to have these two foreign systems running parallel to one another. Ricky’s like an alien within the subway system and doesn’t really know how to navigate it. Mariana is an alien within the United States, and a lot of the systems that exist aren’t there for her. The beach was also another element that I wanted to evolve. It becomes part of her environment and community. She goes to the beach, which is a place that her son liked but she didn’t have a connection with until he went missing. I tried to have a little bit of a see-saw effect where one thing goes up while another thing goes down, and keep things connected in that way.”—Sam Fleischner, director of “Stand Clear of the Closing Doors”

“I was at the peak of my Bond obsession when I was Brian’s age, and I would read nothing but James Bond. My mom bought me a copy of Kidnapped, and said, ‘Read this, this is good literature,’ implying that James Bond was not. So I resented the book and read only two pages of it. That was my first exposure to Robert Louis Stevenson. When I finally read Treasure Island, I loved it, and discovered that it had the same beginning as ‘The Man Who Knew Too Much,’ where a dying pirate gives the hero a treasure map. So Hitchcock stole from Stevenson and I stole from Hitchcock stealing from Stevenson.”—Jeffrey Westhoff, author of The Boy Who Knew Too Much

Frank Mosley, director of “Her Wilderness.” Courtesy of Femmewerks Productions.

“Understandably, there are a lot of actors I know who don’t think about the big picture and how their role fits into a movie. They think about themselves—their shot, their close-up, their screen time—and as a director, I can’t think that way, so that’s kind of how I am as an actor. As an actor, I’m like, ‘If you want to shoot this whole scene with just the back of my character’s head visible because it’s true to your vision and style, then that’s great.’ It’s not about ego, it’s about being a paint for the canvas and being used however is needed.”—Frank Mosley, director of “Her Wilderness”

“I was doing a spot at a big hospital in DuPage, and the producer asked me if I could pick up another actress on the way there. It was a super-early call time, and I grabbed her at five in the morning. She gets in my car and laments, ‘Oh my gosh, the things we do for $250.’ And I was making $850 that day. That’s when I realized that we, as actors, need to get our s—t together and talk with each other and guide each other. Honestly, in some ways, it’s us against the world. Everybody can make money off of us and if we aren’t protective of that, we won’t be making any money at all.”—Grace McPhillips, star/producer of “The Other One”

“There’s stuff in the movie that, personally, I don’t find all that shocking. I always thought that the shock value was more of an undercurrent than the point. It’s the undercurrent and not the wave. The wave is the performances and the story and underneath everything there’s this layer of dirt that is gross and mean. I don’t feel that any of our main characters are mean, they’re just misguided. I don’t think of the movie as that shocking. I just saw ‘Pink Flamingos’ at a John Waters retrospective. For me, ‘See You Next Tuesday’ is pretty tame. I used to make movies about people f—king lepers.”—Drew Tobia, director of “See You Next Tuesday” 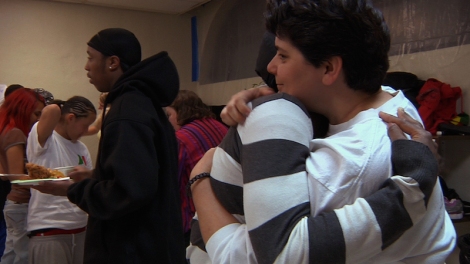 “These ancient stories may have no relevance in your life, but once you infuse them with your own personal experiences and point of view, they become really powerful. When Roque came into that program, he would not speak. He felt completely invisible, and I think that ‘awakening of voice’—and what that means on various levels, consciously or unconsciously—has the potential to happen in the CPS Shakespeare program.”—Kirsten Kelly, co-director of “The Homestretch”

“When it comes to the Rapture, it’s a specifically Christian encounter and the moment of judgement where some people are taken with the Lord and others are left behind. It’s a story that’s black and white. But when you present a film like this to an audience and give them an opportunity to step into the character’s shoes—sort of like in ‘End of Watch,’ where we see what the characters see, but not like ‘Blair Witch Project,’ where the whole thing is found footage—it makes the questions that the film is asking more personal.”—Bryan Dechart, star of “The Remaining”

“It’s not that he’s puritanical. He has actual nonreligious body issues and those coexist with his religious self. They’re actually sort of separate, and we touch on that later. It’s kind of funny when Paul and Hillary are on the steps, and she literally goes down a checklist of why he might be repressed. In the last third of their conversation outside, religion isn’t really mentioned anymore. She’s like, ‘Okay, let’s move on from religion. Let’s talk about your interactions with people: Were you abused? What was your relationship like with your family?’ So I’m not convinced he’s like this because of religion. The reason that I think he’s an interesting character is because it’s arguably irrelevant.”—Stephen Cone, director of “This Afternoon”

“I guess there’s really only one fundamentalism in the world, it just takes different shapes. Maybe it’s a streak in our nature. All those fundamentalists have similar agendas, ISIS isn’t so far away from what Calvin did in Genève in the 16th century, even if Calvin didn’t chop off that many heads. Anyway, I guess film is not the best medium for delivering messages, it’s more about sharing people’s lives, getting into somebody else’s mind, and touching their heart, even if it’s a fundamentalist mother.”—Dietrich Brüggemann, director of “Stations of the Cross”

In addition to these interviews, I also wrote essays on indie masterworks such as Dan Rybicky and Aaron Wickenden’s “Almost There,” Alex Garland’s sleeper hit “Ex Machina,” divisive blockbusters like “Fifty Shades of Grey” and various selections at the Chicago International Film Festival, where I found time to chat with Michael Moore. One of my most impassioned articles analyzed the surprisingly successful slate of theatrical releases targeting evangelical Christians, which led some readers to request that I review “Kirk Cameron’s Saving Christmas” (and I did—hope you’re happy, readers!).

Rather than stick to writing solely about current releases, I chose to look back at some of my favorite films, including Alfred Hitchcock’s “The Birds,” Albert Brooks’s “Mother” and the Top Ten Spielberg Summer Movies. I delved into the archives to unearth two ambitious pieces from years past: “All Things Shining in Terrence Malick’s ‘The Tree of Life’” and “Persona Non Grata: The Persona of 3 Women on Mulholland Dr.” Two stars of this year’s Oscar telecast—Julianne Moore and Julie Andrews—were each given a heartfelt tribute, as were the dearly departed Roger Ebert and Robin Williams. When Disney decided to release big-screen versions of “Cinderella” and “Into the Woods,” two of my most cherished nostalgic staples, I contrasted them with their beloved predecessors—the 1950 animated classic and the 1987 Broadway production, respectively. When I heard the hilariously scathing opinion of my friend and colleague, Rob Walker of ChannelAwesome.com, regarding the new “Cinderella” film, I asked him to pen a rebuttal. His review, which I published, is, quite simply, a must-read.

Stay tuned for Part II of this anniversary retrospective, which will feature highlights from my interviews and essays at RogerEbert.com.