When people ask me for advice on how to be a writer, I always encourage them to find a way to write about what they love, regardless of what their day job happens to be. One of the best things about the internet is in how it allows you to build a body of work that people can view and respond to around the world. I haven’t been paid to write anything for this site in the six years since I founded it, but I have no doubt that this platform has made me a better writer, and ultimately led to the incredible opportunities I’ve had elsewhere. Though my duties at RogerEbert.com have slowed down the number of posts on Indie Outlook, I always make sure to pour my heart and soul into an interview and/or article each month, and I have no desire to stop anytime soon.

Therefore, to commemorate Indie Outlook’s sixth anniversary, here are highlights from the interviews I had the pleasure of conducing for this site over the past twelve months. Click on each highlighted name and you will be directed to the full conversation…

“People ask me why I did the film, and really it’s because I’m selfish. I needed to care about this topic for the next three to four years. I needed to read about it, speak about it, write about it, shoot it, edit it—this topic would essentially be my family for the next four years, and it needed to warrant my interest. Not only is this topic controversial, it also has no solution.”—Anne Zohra Berrached, director of” “24 Weeks”

“Most women have had an encounter at some point in their lives that was either physically or sexually or verbally abusive. All of my female friends are shaken by Becca’s encounter, while many of my guy friends are like, ‘He didn’t mean to hurt the girl…’ A guy doesn’t have to be physically abusive in order to pull on your mental state, cause you fear and be an intimidating factor in your life. The subtle ways that men wield power was more interesting to me than a killer with a shotgun. That’s not as scary to me.”—Clare Cooney, director/star of “Runner”

“There were several cases where Yezidi women were serving as slaves for the family of someone in the administration of the Islamic State. In that scenario, captivity was better for them. The man’s wife and children would often feel sorry for these girls, and in some cases, they’d let the girl go without the husband knowing. It demonstrates the insanity of the whole ISIS situation, which is unrelated to religion. It’s just pure madness.”—Angelos Rallis, director of “Shingal, Where Are You?”

“It’s very interesting for me to hear about how sexuality is dealt with in American films. ‘Kaboom’ was my first American movie, and I had to have a conversation with my manager and my agent about the fact that I show my breasts in the movie. They were talking to me about my nudity, and it all had to be written in the contract. I felt so awkward that it would be on paper, and I didn’t like to speak about it with these men who I didn’t really know. In France, it’s not like this at all.”—Roxane Mesquida, star of “Mercury in Retrograde” 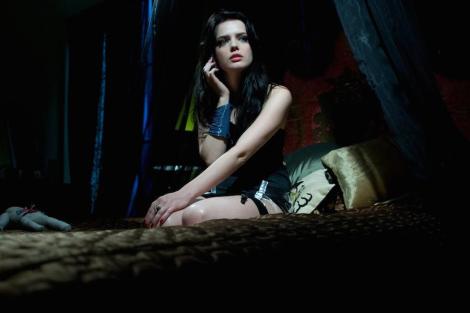 “I storyboard all of my films, but I don’t cover things. There aren’t that many takes. It’s about picking the right people and getting them in the zone with you. Again, a lot of it comes down to intuition. When you’re on the set shooting, the actors don’t need to be told too much, especially if they’re really good.”—James Fotopoulous, director of “The Given”

“I remember that we were running behind that night. It took a while to set up the shot and get it ready, and we probably shot about 7 or 8 takes of it. We had two other shots planned in the scene, but when we got the take that Kogonada wanted, he said, ‘We don’t need the other shots.’ That’s a ballsy decision, considering the length of the scene. It’s decisions like these that made the movie better.”—Elisha Christian, cinematographer of “Columbus”

“Matt has actually lived with someone with this kind of affliction for many years, so he knew first-hand the mannerisms and emotions of someone with that condition, as well as the emotions of those who encounter it on a daily basis. He’d describe the conflicting feelings of getting annoyed at that person, and then feeling guilty about being annoyed. When you’re dealing with someone who has that level of issues, it creates a mixture of emotions: sympathy and hate and fear and anger and love and compassion and sympathy again. It puts everything right on the surface because the person or their situation isn’t giving you enough space to deal with your own emotions.”—Theodore Collatos, director of “Tormenting the Hen”

“This women was describing how starved for any type of physical contact and affection she had become as a novitiate. She wrote about an annual ceremony in which one of the older nuns would kiss each of the younger sisters on the forehead in a very perfunctory manner. For the other 364 days of the year, the author of this memoir was utterly yearning and dying for that day to arrive just to experience that fleeting moment of intimacy.”—Margaret Betts, director of “Novitiate”

“I just thought the script was honest enough to where I could believe it. I’m never going to be cast as the lead in an action film, so I loved that this film allowed me to run with a gun in my hand. This role was nothing like the quirky best friend that I’m always cast as.”—Tamara Chambers, star of “Think Twice”

“I didn’t specifically attempt to reflect music from a particular culture. The score was based more on the emotions of a given scene, and I often like to fuse different elements that aren’t typically heard together, while avoiding anything that would sound too obvious or stereotypical. If anything, the music serves as a bridge between the cultures.”—Emer Kinsella, composer of “Faith”

“Zaynab doesn’t tell her mother about who she likes to hang out with at night. And yet, despite the absence of a big coming out monologue, we somehow understand that they are communicating with one another. That’s a very common situation among children of immigrant parents, particularly those who came to the U.S. from more conservative cultures.”—Jennifer Reeder, director of “Signature Move”

“It’s always interesting how your relationships grow stronger onset as the film progresses. Though Isabelle and Peggy weren’t supposed to like each other, Roxane and I hit it off immediately. Michael was really flexible. He allowed us to develop and change characters, scenes and dialogue in order to make them fit better with the actors. It’s been a really interesting and challenging experience.”—Najarra Townsend, star of “Mercury in Retrograde”

“I want to cross lines, but in a way where everyone knows that lines were crossed intentionally and that we are all on the same page while creating something together. That takes a lot of trust and a lot of talk ahead of time in rehearsal, as well as someone like myself who is very sensitive to that and aware of that. You need someone who isn’t going to play tricks on anyone. Little tricks are okay, but not big tricks.”—Elizabeth Wood, director of “White Girl”

“Politeness, in this case, is not the same thing as empathy or caring for one another. Those are human values I strongly believe in. Fake politeness, on the other hand, is a form of violence. I like what you said about polite art. I don’t see any need for it. Art should be disturbing to some degree, and it should be challenging you somehow as a viewer. That’s what I expect from any work of art—that it will challenge me to redefine my beliefs. […] I would really challenge this habit of making movies that preach beliefs as opposed to open new questions. Great art should ultimately make you want to start thinking for yourself.”—Jakob Lass, director of “Tiger Girl”

In addition to these interviews, I also found time to pen appreciations of films such as Elvira Lind’s “Bobbi Jene,” Paul Schrader’s “First Reformed,” Andrew Droz Palermo’s “One & Two,” Amy Jo Johnson’s “The Space Between” and Rian Johnson’s “Star Wars: The Last Jedi” (an audacious blockbuster that gets better every time I see it). I was so blown away by David Lynch’s 18-part masterpiece, “Twin Peaks: The Return,” that I gave it not one but two in-depth analyses, while ranking it at the top of my two-part list featuring the greatest cinematic achievements of 2017 (click here for Part 1 and here for Part 2). My festival coverage included splendid highlights from Pens to Lens in Champaign, Illinois, and CIFF 2017, where I got to preview some of the year’s best work, including Stephen Cone’s “Princess Cyd” and Martin McDonagh’s “Three Billboards Outside Ebbing, Missouri.”

A few artists over the past year moved me so deeply that I couldn’t resist devoting an entire article to each of them, namely choreographer Ryan Heffington, ventriloquist Darci Lynne Farmer and “Everything Sucks!” star Peyton Kennedy. I also explored my increasingly conflicted feelings regarding Tommy Wiseau’s Z-grade classic, “The Room,” and when Halloween rolled around, I gave my recommendations for six soundtracks worth blasting out your window for trick-or-treaters. Guest writer and master video essayist Nelson Carvajal sang the praises of Sean Baker’s brilliant film, “The Florida Project,” and I unearthed my interviews with the talent behind Jonathan Dayton and Valerie Faris’ criminally overlooked “Ruby Sparks” in honor of its fifth anniversary. Greta Gerwig’s historic Oscar nominations for her triumphant solo directorial debut, “Lady Bird,” made me so inspired that I put together a list entitled, “180 Essential Films by Female Directors,” which quickly became one of the most popular posts in the history of Indie Outlook.

In my annual list of the people I would nominate for Oscars, I included a new category, “Best Cameo,” since 2017 was chockfull with extraordinary performances that transcended their scant screen time and remained indelibly etched in my mind. Michael Cera as Wally Brando in “Twin Peaks: The Return” and Betty Gabriel as the exquisitely unsettling maid in “Get Out” were two instant contenders, though in my mind, there was only one winner: Frank Oz, reprising his puppeteering role as Yoda in “Star Wars: The Last Jedi.” This past May, I had the opportunity to see Oz’s astonishing show in New York City entitled, “In & Of Itself,” which runs through August 19th at the Daryl Roth Theatre. It was written and performed by master magician Derek DelGaudio, and my sister and I were left utterly amazed by the experience. After posting my review of the show, Mr. Oz reached out to me via Twitter, and said the following words, which I now have framed on my wall…

Stay tuned for Part II of my anniversary retrospective, featuring my interviews and reviews posted at RogerEbert.com.

For links to the past five years’ worth of anniversaries, click here.